“a colossal dragon-like creature unleashed with the ancient spirits. It rules the skies with its unrivaled might.”

ℹ️
100%
5-10/10-20(Expert) Souls of Flight
100%
The Wyvern is a a hardmode miniboss that spawns in the sky. It's a serpent-like dragon with small legs. In 3DS and old-gen console versions, it has a stronger version called the Arch Wyvern.

It will only spawn when the player is at sky level (300+ feet, 500+ feet, and 1,000+ feet on small, medium, and large worlds respectively). Wyverns spawn at the same altitude as Harpies. It seems to spawn lower than this on Blood Moons and in The Hallow. This enemy is very strong and can be dangerous for players without good armor and defense. Lingering in one spot and taking the full brunt of its attack can rack up a lot of damage, even with good Defense. Be aware that once the Wyvern is spawned, he will follow you, even if you use a magic mirror. The only way to escape is to either kill him, let him kill you, or go deeply underground. 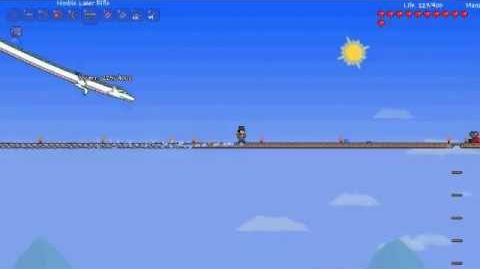 The Wyvern has a specific attack pattern; it will dash straight at the player when it spawns, with a slight tracking behavior. Once it has passed the player, it will curl up at a point just off-screen and return for another dash. The pattern resembles the figure 8. Listed below are some of the strategies known to work against this enemy.

A good strategy is to make 2 wide platforms out of Wood Platforms, one above the other, and when the Wyvern appears, stand on the lower platform and just move left or right a little. Time the jumps to the moment when the head almost touches the player. One should be able to dodge its attacks most of the time.

Make a Skybridge in the atmosphere (where gravity has less effect). Use at least ~300 blocks so you can do a full run, jump, and float with Spectre Boots + Cloud in a Balloon twice. Then run fast so the Wyvern follows you in a more or less straight line, shooting him with piercing weapons along his length. If you reach the end of your bridge, turn around and run the other way. 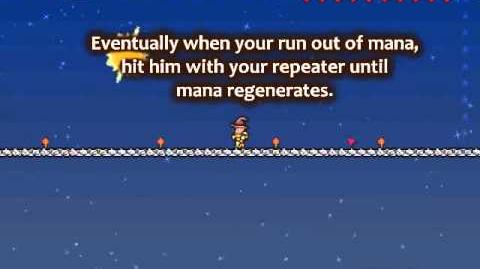 With Rocket Boots, Spectre Boots, or Wings, one can go through a repetitive motion of jumping and flying to the left/right, attack from above, wait for it to come back into sight, rinse, repeat.

If one has a relatively powerful sword, like an Ice Sickle or one of the higher tier ore swords (Fiery Greatsword or better), it can easily be killed with good timing. It will always charge at the player from above and come into the range of swords, which is ideal for swords usage. A Hermes Boots or better is needed as they can make the difference in dodging its attacks. When it charges down from the left side, run left towards it and pass right beneath its head. The time it well so it barely misses, then hit it with a sword as it tries to bend because of its slight tracking nature. A lot of damage can be dealt with when the sword hits multiple segments. This doesn't require some sort of arena. The running space a floating island gives usually is more than enough to dodge the attacks.

Get a relatively powerful flail (Sunfury or a Dao of Pow) for melee, piercing weapons for range and magic. Once a Wyvern spawns, use the potion to alternate falling up and down while staying horizontally still. As the Wyvern is approaching from above or below, aim directly along the length of its body with one's weapon of choice. Aimed correctly, the Wyvern's HP will drop tremendously.

Build a house for the Nurse away from other NPCs. Wait for the Wyvern to spawn, and stand right above where the Nurse is, making sure one can still interact with her. The Wyvern will do a figure of 8 to hit the character (when standing still). Simply use a weapon of one's choice, and healing with the nurse whenever health is low(Try to stand 10 blocks away so the nurse doesn't die while the Wyvern is attacking).

Build a small house at the top of the world with a bed inside. Set this house as the Spawn Point. When it appears, simply jump out and begin attacking the Wyvern with one's weapon(s) of choice. If it's not killed by the time the ground is close-by, simply use the mirror to do it again.

The best weapons of choice are weapons that can ricochet, like Cursed Flame/Meteor Shot. Enter a house on a Floating Island and close the door (alternatively, a box high in the sky can be built). Then, simply wait until the Wyvern spawns, and as soon as it sticks its head in, shoot. The bouncing projectiles should deal a ton of damage on the Wyvern.

For this strategy you will need the Slimy Saddle, A powerful Yo-yo, like the Amarok, or a rapid fire ranged/magic weapon, Like a Minishark or better with Cursed Bullets/Ichor Bullets or Crystal Storm. Build a skybridge at least 100 blocks long, and wait for the Wyvern to spawn. once the Wyvern swoops in, time your jump with the slime mount and bounce on the Wyvern while using your weapon. The slime mount will bounce on Its segments and damage it while you damage it with your weapon of choice. Keep repeating this process until the Wyvern is dead.

Fighting a Wyvern during a Blood Moon

A Wyvern lit up by a Rainbow Rod's Rainbow

This guy should watch out! He's in trouble! Lots of trouble.

a picture of a Wyvern

A Wyvern glitched from a gravitation potion