Sells Mana related items
The Wizard is a NPC that sells mana-related items. Once the Wall of Flesh has been defeated, the Wizard can be found anywhere underground, or sometimes he can be found in the dungeon. Using the Hunter Potion will highlight the Wizard to be easily found in the dark. The Wizard only sells materials to be made into spells by the player, and doesn't sell premade spells. The Ice Rod is the only premade item that the Wizard sells that isn't a crafting material. All of the things he sells can only be bought from him and cannot be found anywhere else in the world. Once unbound, if he comes into line of sight with an enemy, he will shoot fireballs that resemble the Flower of Fire to defend himself. It is currently unknown how much damage these fireballs do, but they have been observed to do 19 damage to a Floaty Gross and 26 damage to a Skeleton Archer. 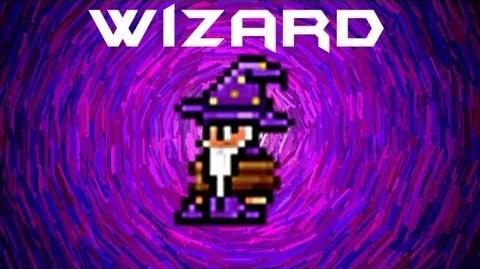