This page is for descriptions of various Wire Creations. Use the Gallery section for pictures and the External Links section for external links. If you have wire traps, those should go on the Traps page of the wiki. 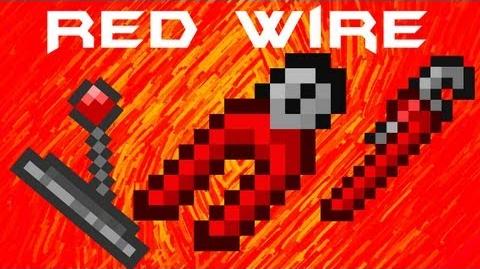 Many of these items may be purchased from the Mechanic, otherwise they must be found or crafted:

Possibly one of the easiest wire creations in Terraria: the simple light switch. To create a light toggle system, all you need to do is use Wire to connect one or more "wire-able" Light Source(s) to a triggering device such as a timer, Lever, Switch or Pressure Plate. Many lights can be connected to a single triggering device on the same circuit.

NOTE: When building a light toggle system in your home--unless you want your doors toggled when you activate/deactivate the triggering device--do not allow the wire to touch them.

The light toggle system is used to quickly get rid of all the lights without breaking them. This could be particularly useful for a custom Terraria map. See the gallery below for pictures.

A lockdown system is a wire creation that allows a player to lockdown a house so that monsters and other players cannot easily enter. To create a lockdown system, you need to connect every Door in your house to a single triggering device on the same circuit.

NOTE: If your house also has a light toggle system or other circuits, be careful not to cross wires, unless your intention is to have your lockdown system on the same circuit as something else, or alternatively, use different colored wires.

When the triggering device for this system is activated, all doors to your house will open or close. This system can be improved by placing Active Stone Blocks behind or in front of closed doors so that monsters won't be able to open them. Active/inactive stone blocks can also be used to build a drawbridge in front of your main entrance, and this drawbridge can be connected to your lockdown system to make your house more secure. Alternatively, you can use blocks that are connected to the actuator to achieve the same effect.

The crab engine is a wired machine powered by crabs in order to do rapid fire pressure plate pushing. This is particularly useful for farming items like gel and goldfish, but the crab engine can be added to a wide variety of wire creations.

To create a crab engine, you will need to connect a Crab Statue to a triggering device with wire. You will also need to construct a 2x2 box to trap a crab in, and place a pressure plate inside of that box. Active Stone Blocks can be used as part of the wall, though they will require their own circuit.

An optimal crab engine typically has 2+ separate 2x2 boxes, each with their own crabs and pressure plates. Red, Green, or Yellow Pressure Plates must be used as of 1.2. Those pressure plates are then connected to each other and various activated objects on their own circuit. Some even include some kind of trap to kill the crabs after they have finished their job.

To use the crab engine, you need to spawn a crab from the crab statue and somehow trap it in the 2x2 box that you constructed. An alternative to active stone blocks is to just wait for the crab to fall/walk into the box and then wall it in with blocks.

The crabs will jump at an incredibly rapid rate--far faster than a 1 second timer activates. The pressure plates that the crabs are jumping on will power whatever objects happen to be connected to them.

See the gallery and external links sections below for more info about crab engines.

A fountain can be constructed in many ways. You will need an outlet pump at the top and an inlet pump at the bottom. You may use a 1 second timer, a bird engine or a crab engine to repeat the process. It is recommended to use the timer because it takes up less space. You will have to experiment with it to get it to work right. To start the engine you should have a switch, lever or pressure plate to start the timer or engine. Another reason you should use a timer is turning the fountain off because you would have to kill the enemy in an engine. Turning it off is important because leaving it unattended can cause it to overflow.

A statue farm is a wire creation that allows the player to farm items such as Goldfish, Glowsticks or Gel by rapidly spawning monsters from certain Statues and then killing them. A good statue farm requires a circuit, several statues (usually 3 or more), a method of powering the statues, and a method of quickly killing the monsters once they've spawned.

Any triggering device can be used to spawn monsters, but the crab engine shown above is the fastest option. The next fastest method for spawning monsters from statues would be to use a 1 second timer.

There are many different ways to kill monsters that spawn from statues. You can kill them manually with a weapon, you can spawn Piranha from the Piranha Statue to kill them, or you could use an automated trap (example: Dart Trap).

However, the fastest method of killing monsters is to place the statues in a thin layer of lava. Many statue-spawned monsters have so little health that the lava will kill them instantly. As long as the lava in thin enough, items won't melt.

To collect the items that the monsters drop when they die, all you need to do is stand close enough. Typically you would want to stand underneath or above the statues themselves. Having an NPC house next to your farm will allow you to quickly sell items when your inventory fills up. You could also place them in a chest.

Many different designs can be used with a statue farm. See the gallery and external links sections below for more info about statue farms. 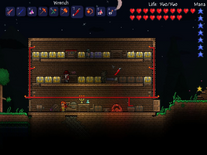 A slime farm powered by a crab engine

The dimensions for the previous farm shown by a ruler

A secure house with wiring example of a lockdown system.
1/5