It is possible for the jungle to fuse with the Corruption or the Crimson. This happens naturally after Hard Mode is activated and Corruption/Crimson start aggressively spreading. Jungles can be converted to Corruption/Crimson from underground since Ebonstone and Crimstone  spread Corruption/Crimson respectively. In this process, Mud blocks are converted to Dirt blocks and Corruption/Crimson related flora and fauna will start to appear. This process is difficult to reverse since jungle grass cannot grow on dirt blocks, the only reasonable option other than replacing all the dirt with mud would be to use the Clentaminator or Holy Water to convert the invading Corruption/Crimson to Hallow. Hallow will not spread through mud, effectively preserving the Jungle. It is also possible for the surface jungle to fuse with the Desert. A Glowing Mushroom biome can also be found inside of an underground jungle since both of them use Mud blocks. 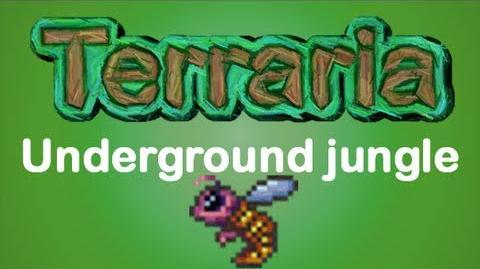 The Underground Jungle is a biome found mainly underground (see the name). It usually makes its home from about 5% to 10% of the entire underground (might vary by map size). Much like dungeons, they stretch across the top of their horizontal location to the bottom of the map, stopping a bit above the Underworld biome. The edges of the Jungle smoothly cross over to normal caves, gradually replacing mud with more stone and dirt. Other monsters common in the overworld and in the dirt-rock and rock-dirt layers can be found, but it has four unique monsters: the Hornet family, which consists of the Hornet itself, the Little Stinger and the Big Stinger, and the Man Eater, which are the only current way to get the Stinger and Vine respectively. The world generator also places more Gemstones in Underground Jungles.

Jungle Shrines are small structures made out of Gold Bricks found in the Underground Jungle. They are similar to the Floating Island's shrine, but smaller. Each shrine has a chance of containing an Ivy Chest that contains special equipment and items not found in other Environments. Shrines may contain zero or two chests, but this is very unlikely. They also sometimes appear very close to the surface when your Jungle Mud is above ground during rare occasions.

Items that can be found in the Jungle Shrine chests include the following:

Rarely, Jungle Shrines can be found floating above an underground jungle. However, this may only happen when an underground jungle extends to the surface. Also, in a spacious cavern lacking cave structure, it is possible for Jungle Shrines to not have any walls due to other plants obstructing it. On some occasions giant hollow trees can be found with the same sort of chests in them.

The Hive is a structure found deep in the Underground Jungle. It is surrounded by Hive blocks, which can create Honey or Bees when destroyed. Inside can contain Honey, which provides life regeneration once walked in, or collected. Occasionally there is Larva, which summons the Queen Bee once destroyed. Once the Queen Bee is defeated, the Witch Doctor will spawn if there is available housing. In a jungle, there maybe be 1 bee hive minimum, and about 5 or 7 maximum.

The Lihzahrd Temple is a large structure found deep in the Underground Jungle. It requires a Temple Key to enter, which is dropped by Plantera. Inside the temple are dangerous monsters, including Flying Snakes and Lihzahrds. The several rooms inside have Pots, unique (and upgraded versions of) Traps, and Lihzahrd Chests. One of these rooms is a Shrine, a large room with a Lihzahrd Altar inside. A Lihzahrd Power Cell is required in order to activate the Lihzahrd Altar and summon the Golem boss.

On a medium map, you can usually find jungle at 800-2200 feet. It is common to find lava in the deeper parts of the jungle.

It is occasionally possible to see the top of an Underground Jungle at the surface of your level, amongst the Forest Biome.

As of update 1.0.4, underground jungles are now directly underneath surface jungles.

There are also rare occasions in which you may find 2 Underground Jungles in one world.

Use a Depth Meter to see how deep you are.

The Jungle is always on the opposite side of the Dungeon and the Snow Biome.

Underground Jungles also contain several unique plants, such as the Jungle Rose, Nature's Gift and jungle spores. The Jungle Spores are used in tier 2 to 3 crafting, necessary in weapons such as the Thorn Chakram and Blade of Grass as well as the tool Ivy Whip; furthermore, Jungle spores, Vines, and Stingers from Hornets are needed to craft the Jungle Armor set. If you can, try to make an area to craft while in the jungle and make yourself the items mentioned above ASAP (if you don't already have them or higher tier items) as these are both extremely useful for fighting the monsters safely and navigating the jungle more easily.

The Underground Jungle can also be helpful for making Obsidian if there is a Lava pool because of the fact that there are many water deposits.

Underground Jungles are made almost entirely of mud, and this can sometimes reach to the surface leaving large areas of almost entirely mud, which can be used to locate the Underground Jungle. Another way to help locate the underground jungle is to dig down to about 700-1200 depth and go horizontally. As of 1.1, the underground jungle may also have Silt Blocks, which look similar to ash but behave like a gray sand which cannot be crafted into glass. It can also be converted into more useful materials with the Extractinator.

The jungle grass spreads faster if it has a two block high or wide path to grow on.

Leaving the vines uncut can be limiting because it severely hampers your view of the surrounding area.

In the Underground Jungle using any weapon with which you would cut normal grass can be used to cut grass in the jungle, making it have the same properties as well as being able to drop Jungle Grass Seeds.

There are also Rich Mahogany trees, which will only grow in mud covered with Jungle grass.

Bosses (Found, or can only be spawned in Jungle)

an Underground House in the Jungle

A Jungle Shrine spawned in a Chasm. Notice the golden Wall blocks and the Chest that had spawned on the floor of the Chasm.

The Underground Jungle is a dangerous place to explore, as it is home to Hornets, probably one of the most annoying (and dangerous in swarms) monsters you'll come across in Terraria. Thankfully, you can trap them in Flying Enemy Cages.

The Underground Jungle can stretch so far down underground that it's possible to find entrances to it from the Underworld (or vice-versa).

A mushroom biome in the underground jungle 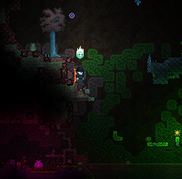 Crimson tree cannot normally grow in the underground, but thanks to corrupted Underground Jungle, it is possible.

Occasionally you can find giant Mahogany trees deep underground in the jungle.
Community content is available under CC-BY-SA unless otherwise noted.
Advertisement