Terra Blade
The True Night's Edge is a melee weapon which swings at fast speed and is crafted with a Night's Edge, 20 souls of might, 20 souls of fright and 20 souls of sight. It is a Hard Mode item which fires a spinning, bright, glowing, green sword projectile that hits the first enemy or wall it touches, and shatters in bright green sparks, akin to Cursed Flames. However, the swing and the projectile have two separate use times, thus the projectile does not fire with every swing. Its base damage is stronger than The Horseman's Blade and Christmas Tree Sword, only weaker than the Terra Blade by the raw damage per swing. 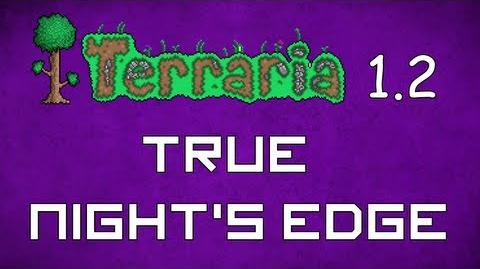 The projectile fired from the True Night's Edge when swung