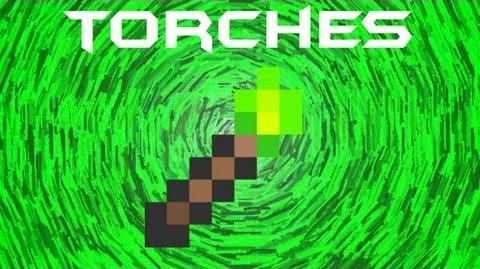 Torches stay lit and do not extinguish over time. This is valuable when exploring underground because it helps to identify that have already explored. Torches can be picked up using a pickaxe or by right clicking on them. Torches can be placed on trees.

They can be thrown to cast light into dark areas below the player by pressing the throw button. If you have a torch in your inventory you may take it out at any time by pressing and holding the shift key (default), you may also place torches using this method, eliminating the need to keep torches in your hotbar.

You can also use different types of gems to color the lights the same way as Phaseblades. Also, torches can be upgraded to Cursed Torches and Ichor Torches by combining them with Cursed Flames and Ichor respectively: this allows the torches to emit a green/yellow light and be placed underwater.

Torches can also be switched on or off when wired to a Timer, a Switch, a Lever or a Pressure Plate.

On top of their primary purpose, they can be used to mark interesting places on the minimap since torches reliably show up as bright yellow pixels, making torch "pixel art" easy to find on the map. It is a good idea to make a square, arrow etc. (anything that stands out on the map) of torches at each of the four locked chests in the Dungeon to find them more easily once you get the respective keys.