“Belonging to a pair of mechanically recreated Eyes of Cthulhu, this one focuses its energy into firing powerful lasers.”

(Night only, when Mechanical Eye is used)

“Belonging to a pair of mechanically recreated Eyes of Cthulhu, this one chases at high speed, exhaling cursed flames.”

(Night only, when Mechanical Eye is used)

“Belonging to a pair of mechanically recreated Eyes of Cthulhu, this one focuses its energy into firing powerful lasers.”

By Retinazer's health dropping to half of its full health

“Belonging to a pair of mechanically recreated Eyes of Cthulhu, this one chases at high speed, exhaling cursed flames.”

By Spazmatism's health dropping to 2/5 of its full health

20-40 Souls of Sight
5-15 Greater Healing Potion
15-30 Hallowed Bar
(only if Retinazer has been defeated)
100%
The Twins are two Hard Mode bosses similar in appearance to the Eye of Cthulhu, and the only sources of Souls of Sight. Although the game classifies them as a single boss, they are two separate bosses, namely Spazmatism and Retinazer.

If an altar has been destroyed, The Twins will sometimes spawn at night during Hard Mode, with the message, "This is going to be a terrible night..." appearing that dusk. This is more likely to happen if the player already has a Mechanical Eye. 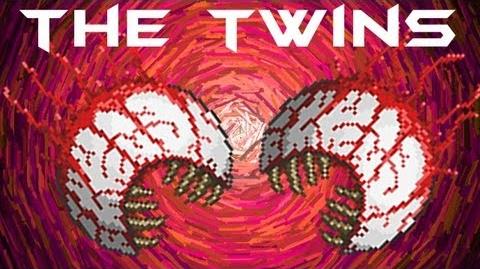 The boss fight can be initiated by using a Mechanical Eye, or by waiting for The Twins to spawn normally (although this might take a while). Although the Mechanical Eye requires Souls of Light, that are only available in a world where the Wall of Flesh has been defeated, The Twins can technically be summoned in any world, regardless of whether or not Hard Mode has been unlocked in it. The Twins will only remain as long as it is Night, and will flee the battle at dawn, similarly to the Eye of Cthulhu.

Upon death, The Twins are guaranteed to drop 20-40 Souls of Sight, 5-15 Greater Healing Potions, and Hallowed Bars. They are the only sources of Souls of Sight. Note that only the last defeated eye drops loot.

The Twins initially consist of two eyes connected together by a "rope" of flesh, one named Spazmatism and the other Retinazer. They maintain separate health bars, and are not considered defeated until both are killed (A trophy can be dropped from one twin while the other twin is still alive, but not other types of loot). Each of these two eyes has a unique AI routine, as well as a second form that it will transform into when it is below half health. Note that just like Eye of Cthulhu, they cannot do anything during transformation, so this may provide an excellent opportunity to inflict a large amount damage on them.

In its first form, Retinazer will shoot lasers at the player and occasionally close in slowly to make a series of melee attacks. The lasers do not pass through blocks.

Spazmatism, in its first form, will shoot cursed flames projectiles at the player and occasionally make a series of lunges at them. The projectiles do not pass through blocks. While shooting the cursed flames, Spazmatism will try to stay in a horizontal position from you.

Retinazer transforms into a laser turret. In this form, Retinazer gains significantly more defense and a much more frightening laser attack named Death Laser. It will always float above or to the left of the player and use its laser attack. When it is to the side of the player, it will begin to shoot its laser in rapid-fire bursts. It will never attempt to use its melee attack, preferring instead to maintain a constant distance between itself and the player. Note that in this form, Retinazer will not even attempt to shoot at the player if it does not have a clear line of sight, and the death laser does not pass through solid blocks. The lower Retinazer's health goes down, the faster the lasers become, making it even more dangerous before its death.

Spazmatism's second form transforms into a mechanical mouth (A lot like the Eye of Cthulhu). Spazmatism's second form is the most threatening part of The Twins, as it possesses the most defense, the most damaging attacks, and the greatest mobility. It will alternate between rapidly charging at the player to use its insanely powerful melee attack, and slowly giving chase while using its medium-range cursed flame breath attack (which is almost identical to the Flamethrower's fire). In this form, Spazmatism will not use the cursed flame attack if it does not have a clear line of sight. Also, Spazmatism's second form looks similar to the Eye of Cthulhu's second form. The flames have a limited range, so with proper equipment, it's possible to outrun them for a while.

The following is a list of strategies that players can employ to defeat The Twins. Remember that making good use of certain tips above can greatly increase the effectiveness and success rate of these strategies.

This strategy will be able to work using Heart Statues, a timer, and 1 Meteorite/Hellstone. All you need to do is to follow the steps to the Destroyer but you only need to use Adamantite Repeater or better and ~1,000 cursed arrows, or you can use the Megashark with ~2,000 Crystal Bullets.

Focus on killing Spazmatism completely first, as his Cursed Inferno debuff can prove to be deadly. He also has higher health to drain, and more defense.

This strategy will require a weapon of your choice and some wings. Walk in between The Twins, and if they, shoot, jump with your wings and attack. When they charge, jump over them and continue. If either of them get into their second phase, circle them and fire until they die.

This is an easy strategy. You will need a Megashark, and a minecart ride that is very long. There is an example below. Ride the minecart ride, and keep shooting The Twins until they die.

With the help of one or more friends, fighting the bosses becomes much simpler. With one player luring Retinazer away and taking cover to avoid its attacks, others can concentrate their fire on Spazmatism and kill it quickly, and successively go back to Retinazer and defeat it. Be careful, as if either the player luring Retinazer or all of the players fighting Spazmatism are defeated, one of the bosses might despawn, making it impossible to get the spoils from beating one twin.