This article is about the boss. For the painting, see The Destroyer (Painting)

The Destroyer (Not actual size)

“A mechanical simulacrum of Cthulhu’s spine decorated in laser - armed probes, which detach from its body when damaged.”

(Night Only, when Mechanical Worm is used

ℹ️
100%
5-15 Greater Healing Potions
100%
15-40 Souls of Might
100%
20-35 Hallowed Bars
100%
Destroyer Mask
14.29%
Horned God Robe (Console)
100%
Mechanical Wagon Piece (Expert Mode only)%
The Destroyer is the Hardmode version of the Eater Of Worlds that was added in the 1.1 update. It has a total of 80,000 health spread over 82 segments (including the head and tail segments) and is made of metal, just like Skeletron Prime's head and hands and The Twins. The Destroyer sends out small flying enemies called Probes that shoot lasers at you. The red lights are probes that have not been sent out yet. As probes are ejected, the lights turn off. 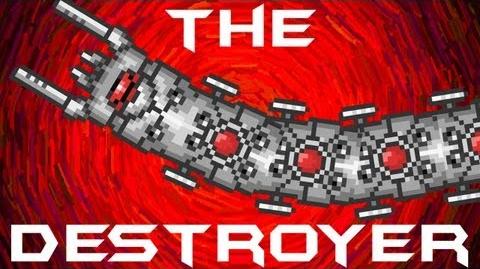 The Destroyer, unlike the Eater of Worlds, does not break apart when individual pieces lose all of their HP. Instead, damage dealt to it will deplete the entire health pool, which means that damaging multiple segments will drain health from it faster. When defeated, loot drops from nearest segment.

The Destroyer sometimes spawns at night during hardmode, with the message "You feel vibrations coming from deep below..." or "You feel a quaking from deep underground..." appearing the previous dusk.

The below strategies require that you have a high defense (50+), which can be achieved with accessories reforge to warding and Adamantite/Titanium Armor. Additionally, you may also use Nimbus Rod with this setup for extra DPS or a Cobalt Shield for no knockback.

For this method, all you need is at least 2 Heart Statues, 1 Meteorite/Hellstone, a few wires, a timer, and a Dao of Pow.

Finally you just simply grapple onto your fire block and throw down the Dao of Pow and let the Destroyer run through you.

Ranged 'Death From Above' Methods

Each individual block of Explosives inflicts about 500-800 damage. About 2-3 groups of explosives should be enough to kill the boss.

This method is similar to the Explosives Method, although easier and quite a lot more colorful. Fireworks deal heavy damage to the boss, and because The Destroyer is so long, he should be very easy to hit.

Note: More or less fireworks may be needed depending on how many fireworks hit the boss, but if you do this correctly, the boss goes down relatively quickly and you do not have to use any form of ammunition. Also, the fireworks make the boss kill quite marvelous to look at. Get a backup weapon in case this fails.

A method that takes advantage of the Destroyer's unusual spawning tendencies, the coil method is one of the fastest ways to kill the Destroyer in late-game play, when farming for souls and money.

A method used to take advantage of the Destroyer`s body length, with each shot dealing a high amount of damage. This strategy is also in version 1.2 or higher. However, to get the Cannon, you need to have finished the Pirate Invasion event at least once for the Pirate NPC to spawn, as he's the only NPC that sells it.

This method includes using summoned minions to aid in the boss fight, spiders to be exact since they are the best obtainable minion before killing any of the mechanical bosses.

This method involves the use of a Daedalus Stormbow and Hellfire Arrows. This is one of the easiest and simplest ways to kill The Destroyer.

This method also will require a Daedalus Stormbow and Holy Arrows. This method allows you to defeat the Destroyer in about 1 minute.

This method works best on a Sky bridge made out of Wood Platforms or similar blocks.

Note: This strategy, if done properly, can defeat the boss in under a minute.

This strategy relies on the Destroyer not being able to reach the player. The way it works is that the player must build a box high above ground where the Destroyer cannot reach them, leave some gaps, and use whatever weapons they have at their disposal.

This is one of the easiest methods of defeating The Destroyer, though it is recommended that the player be wary of Probes as they can fly.