'The essence of Dark Creatures'

Cursed Flames
Dao of Pow
Magical Harp
Mechanical Skull
Mechanical Worm
Neptune's Shell
Golden Shower
Demon Wings
Onyx Blaster
Key of Night
Console and Mobile Exclusive
Suspicious Looking Skull
The Soul of Night is one of the seven souls that monsters can drop after the Wall of Flesh has been killed in the world. Any enemy (excluding those summoned by statues or Meteor Heads) killed in the vicinity of 200 Ebonstone Blocks or Crimstone Blocks while in the stone layer may drop Souls of Night. Even a Corrupt/Crimson enemy (such as the Corruptor) will not drop Souls of Night unless 200 or more Ebonstone/Crimstone Blocks are present. Enemies that do not spawn in the area, but simply followed the player there, may still drop Souls. 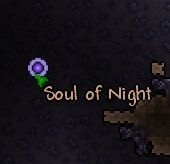 A Soul of Night dropped in the Underground Corruption. 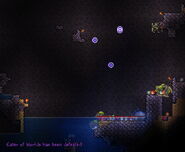 If you use a bait for Eater of Worlds and beat him in the underground corruption he drops quite a lot of souls of night.

All types of souls

A Soul of Night farm in the corruption.

The Soul of Night before the 1.3 update.
Español
Community content is available under CC-BY-SA unless otherwise noted.
Advertisement