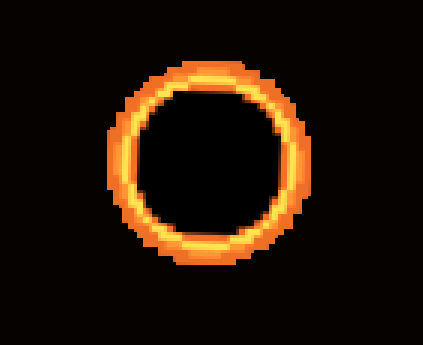 "A Solar Eclipse is happening!"

Spawns: 1/20 or 5%
A Solar Eclipse is an event that has a 1/20 or 5% chance of replacing a regular day when Hard Mode is active in a world or can also be manually summoned by using the Solar Tablet. This event will last for the entirety of the day which it happens on (15 minutes). A solar eclipse is heralded by the message, "A solar eclipse is happening!", and a change in music.

A Solar Eclipse can happen at any time after the player has defeated the Wall of Flesh and any of the mechanical bosses (The Twins, The Destroyer, or Skeletron Prime.) When a Solar Eclipse happens, monsters from the chart below will spawn in the place of regular monsters in all surface biomes. Therefore if you want to avoid this event, you can simply burrow underground, but reapers may still be able to get you.

The monsters that spawn have a chance to drop the Broken Hero Sword which is a material vital to the late-game melee-weapon user, due to it being used to craft the True Excalibur and True Night's Edge, which are then used to create the Terra Blade. (Note: On v1.3.0.1+, the mini-boss, Mothron, is the only monster whom may drop the Broken Hero Sword. It will only spawn after all three mechanical bosses have been defeated.)

It is recommended to get away from your house so that the mobs do not go after your NPCs. Get to a flat area and acquire a weapon that can attack multiple enemies, such as the Paladin's Hammer or the Piranha Gun. The mobs will start to rush at you in lines, and you can quickly finish off the entire line of enemies with a few strokes of your weapon.

Another strategy is to build a lava-pit at either side of your home and a loot-corridor underneath. This way you just have to sit out the solar eclipse, watching as hordes of monsters die in your lava-pits and loot as you walk underneath. Add a Water Candle to increase enemy spawn rate, to help get rare drops.

An alternate strategy involves using a cave or empty house with only one entrance (preferably far away from your NPCs), and place a block in front of the door so that enemies will still try to attack you, but cannot reach you. this will protect you from most enemy attacks, and combined with a multi-hitting melee weapon, can kill mobs without much risk. This strategy still leaves you open to reapers which can travel through walls.

If you need to farm monsters a good way is to build a platform and shoot monsters from there. But if you use this strategy watch out for Vampires since they can fly. For this strategy excellent weapons are the Inferno Fork and Piranha Gun. A Golden Shower combined with a Nimbus Rod also make it possible to go through an entire solar eclipse without moving. Note that Eyezors and Vampires still may be able to attack you.

Another strategy is to build a small box ~12 blocks above the ground so reapers can't get you. The box should be 4x3 with two of the floor tiles being platforms. Simply stand on the platforms shooting down at the monsters with any weapon that reaches them, i.e; flails, guns, bows, boomerangs or projectile swords. The solid blocks are for you to escape to if you are swarmed by Eyezors. If you have a weapon that shots through blocks, i.e; the Death Sickle, you may just completely box yourself in and shoot at the monsters without taking any damage. Regen items like campfires and heart lanterns will not be needed nor will Regeneration and Ironskin potions. You will take very little damage using this strategy and get lots of loot.

The Onyx Blaster, paired with at least 1000 Ichor Bullets and a good modifier, is one of the best weapons for this event, although the player may need a hook as well. Build a platform that you can grapple on, but make sure that you can also have a clear line of sight to the ground and the ground enemies can't reach you. After that, you can mow down the mobs with relative ease. Hold on tight and watch as it delivers blows. The Onyx Blaster fires like a shotgun with one extra large dark projectile, that deals splash damage to multiple enemies, therefore, it's highly effective to mow down the low-health enemies whist the pellets can be used to wreck a high-health enemy such as Mothron or Eyezor. 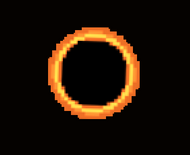 The Sun during a Solar Eclipse

An efficient farming arena made for Solar Eclipse and Blood Moon.

New Monsters for 1.3
Community content is available under CC-BY-SA unless otherwise noted.
Advertisement