No Value
A Shadow Orb is a floating sphere that can sometimes be found below chasms in small empty spaces confined by Ebonstone. Shadow Orbs can be destroyed with hammers, Dynamite or Bombs, which causes a random item drop and sometimes an event. 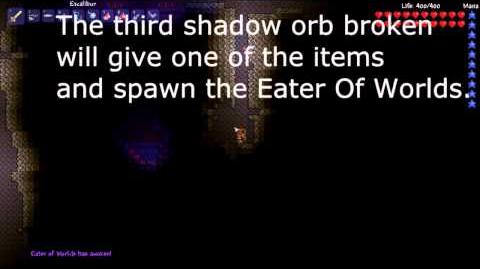 Upon destroying a Shadow Orb, one of the following messages will be displayed in the bottom-left corner of the screen (the three messages are cyclic — after the third orb, it resets to the first message):

One of the two following messages may also be seen some time after breaking a Shadow Orb:

There are three strategies used for getting past the Ebonstone to the Shadow Orb, although it is possible for no Ebonstone to block the way:

Three Shadow Orbs next to each other, one on top of another

Half a shadow orb after destroying one of two overlapping orbs

3 Shadow orbs near each other 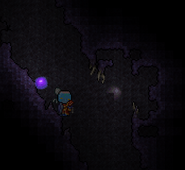 Two shadow orbs spawned in the Hallow, one on top of the other.
Community content is available under CC-BY-SA unless otherwise noted.
Advertisement