Shadow Chests are chests found rarely in The Underworld. These can contain semi rare and powerful items such as the Sunfury, Flamelash, Dark Lance, and the Flower of Fire.

To open a Shadow Chest, the player will need a Shadow Key, which can open an unlimited amount of Shadow Chests without being consumed. Once a Shadow Chest is unlocked and emptied, it can be picked up after being broken down with a Pickaxe. Shadow Keys can be obtained from chests in the Dungeon, or rarely in underground chests. In the right lighting conditions, Shadow Chests may look like Gold Chests, this is often seen in The Underworld. Also, if you go to hardmode without unlocking a Shadow Chest, it will become a mimic (uncomfirmed).

One of those items:

Other items it may contain: 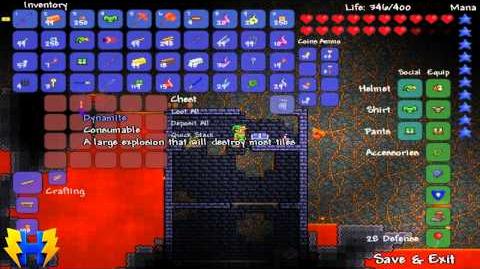 A player finding two Shadow Chests next to each other.
Community content is available under CC-BY-SA unless otherwise noted.
Advertisement