Iron Anvil
Lead Anvil
Shadow Armor is crafted at an Iron Anvil or Lead Anvil and consists of:

The set bonus is a 15% increase to your movement speed. This also increases the speed of which you swing your tools, however it does not actually increase the speed of which you mine, cut down trees, or break things. However, armor from this set can be combined with armor from the Ancient Shadow Armor set for the set bonus. When the sets are mixed, the visual blur does not occur. 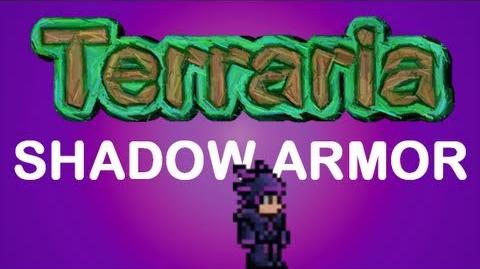 There is a blurred after-image of the armor when it is worn. Each individual piece of Shadow Armor grants a 7% increase to your melee speed. Necro Armor, Ninja Outfit, and the Cobalt Armor will also cause this effect. Also, when using Rocket Boots, the rocket sparks are shaded purple rather than the usual orange. It does not affect the sparks from Spectre Boots.

Because of Shadow Armor's 21% increase in melee speed and 15% increase in movement speed many players use it for PvP as a Hit and Run armor setup. Cutlass, when reforged and combined with Feral Claws and Shadow Armor, is the fastest hitting melee weapon around.