The Pumpking is a Hard Mode boss that spawns during the Pumpkin Moon. It first makes an appearance during wave 7, and it seems to have an AI similar to Skeletron. It has two lengthy arms, each with a large sickle. These hands act much like Skeletron's hands, but they are indestructible.

Pumpking is considered the final boss of the Pumpkin Moon. After wave 7, multiple Pumpkings can spawn at the same time. In later waves of the event, up to 7 Pumpkings can attack the player at once,

It is recommended that multiple players take on this boss at the same time, since other bosses and enemies can still spawn, and Pumpking can prove to be very difficult because of this. However, the more players there are, the more Pumpkings will spawn.

Pumpking's attack pattern depends on the way its face appears; and this will change somewhat unpredictably (unaffected by taking damage). When its face is a traditional Jack-o-Lantern style grin, he will attack the player with his sickles in a similar manner to that of Skeletron. It is advised the player uses the same strategies as they would with Skeletron when fighting Pumpking in this mode.

When Pumpking has an O shaped mouth, he will still attack with his arms. However, Pumpking will also attack the player using greek fire, not unlike the Mourning Wood.

Lastly, when Pumpking is in his final mode, his face will appear similar to that of his first mode but his eyes and mouth will be narrower. In this mode, he will attack the player with blades similar to the projectiles of the Demon Scythe spell.

Note that which face the Pumpking will change to is random, so be prepared for any of them.

Pumpking will flee if all players either exit the game or die.

There are numerous ways to take the Pumpking on as he can die very quickly with high DPS weapons, but some of the most common tactics are listed here: 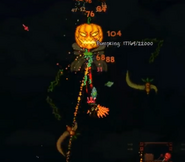