The Pulse Bow is a powerful weapon that is rarely sold by the Travelling Merchant after defeating Plantera. When fired, it shoots a white bolt at a very high speed that bounces off blocks five times. Neutralizes the effects of arrows (such as Venom and Ichor) but still adds with their damage.

This can be a reliably powerful weapon for its cost, capable of defeating most hardmode enemies and hardmode bosses. As of 1.2.4, the Tsunami does the most damage of any bow, but there are many reasons one might use a Pulse Bow, such as the ricocheting factor. 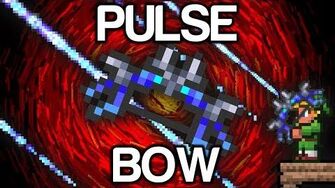