A boss arena is a battlefield designed to give players an extra edge when fighting against bosses like the Eye of Cthulhu or the Eater of Worlds. While boss arenas do vary depending on the boss being fought and the player's tastes, they typically have the following features:

For example, say that a player wants to fight against the Eater of Worlds in an arena of their own, they might decide to build a long arena out of dirt with corrupted grass or Ebonstone, and they might also wish to build 1 or 2 long rows of wooden platforms in case the Eater of Worlds tries to attack by sliding across the surface of the ground. The arena may furthermore be enclosed with walls and a ceiling so that outside enemies won't interfere, and so that ammo from various ranged weapons, such as shurikens or wooden arrows can be retrieved and reused during the battle against the Eater of Worlds.

It is a good idea to place a Campfires and a Heart Lanterns around the arena, and having a Honey Bucket to quickly empty onto the player to give even more regeneration. These regeneration boosters could be life-savers when battling strong bosses. As a part of 1.3.0.1 you can now use Star in a Bottles to increase mana regen.

A Caisson is a structure that allows characters to create shafts through water and empty space (descending in a cavern). It is simple to construct: simply place a row of blocks 4 wide and 2 deep, underneath the character then mine out the center 2 blocks and repeat. Create a U shape out of blocks and then continue normally to capture some of the body of water. If this runs through water, then the water will need to be pulled out with a bucket.

This method can be effective for lower level players who wish to descend corrupt chasms without other means of traversal / navigation e.g. the grappling hook, featherfall potion or orb of light. However, players should be warned that Dynamite or purification powder is essential for breaking through the ebonstone (short of a nightmare pickaxe) that protects shadow orbs.

Additionally, use of this method horizontally can be a safer, yet slower, way to traverse caverns, the Underworld, and Corruption.

Once a player gets to the stage where they have a larger house, it can be easier to have all of the Crafting Stations in one room so they don't have to run around just to craft things. Rooms such as these could have nearly every type of Crafting Station imaginable - with the exception of a Demon Altar and a Crimson Altar, as these can't be picked up. For a perfect crafting area, it would be necessary to build around a Demon or Crimson Altar.

The simplest defensive structure in the game. It is a structure composed of several blocks of material (wood blocks or stone blocks, mud blocks work too) stacked on top of each other. Beginners might find this structure very useful, as it is incredibly simple to build, yet very effective at keeping monsters at bay, when not in Hardmode. Occasionally, players can build doors in the walls, to be able to walk through the walls, while keeping most of the enemies at bay. The principal advantages of the wall are:

- It is very easy to build and it needs only common materials.

- Can be used as a cheap protection method when there is no player house built.

- Can be used for escape points, running through the open doors, then closing the doors on the monsters.

- Very useful when night comes and the player is far from home, just go to the nearest wall and build another one, preventing zombie aggression while being able to easily defeat demon eyes and loot their drops.

It is NOT recommended to use them during blood moons, as zombies can open doors.

The point of this structure is to keep every kind of monster except burrowing monsters out of the player made house. Simple enough for starters, yet sturdy enough to last into Hard Mode. To Effectively build the Grease Trap, the following is needed:

The grease trap is now complete. Flying monsters cannot break down the door, and regular monsters cannot jump up on to the small ledge to break open the door. This is the most basic Design, fancier layouts can be built later on by making holes for shooting monsters etc. Grease traps work best in pairs, i.e. placing one facing east, and west, so monsters do not approach from the other side.

A lock wall is a useful system which prevents NPC's from leaving the building. It is also useful from keeping zombies out as they can't open active stone blocks and prevents them from breaking down the inner door.

A lock wall can be made with active stone blocks in front of a door, and a switch with wire to activate it.

Building a house in the air prevents any sort of land monster to enter the house regardless of their ability to knock down doors. Flying creatures can still be a problem but are easily nullified with platform traps and doors. Building a house like this is completely impregnable except by Goblin Sorceror, Worms or Bosses. As seen in the screenshot on the right, only one Zombie is allowed to spawn despite Blood Moon due to how many Demon Eyes are trapped, in addition the player can fight on the ground with melee or from the central "Airlock" of the house with ranged weapons. The only issue with this type of house is it can be detrimental to one's sense of reality.

An effective Blood Moon/Goblin Night defense system includes sand on top of a torch or a door, where the player breaks the torch or closes the door and sand falls on the entire home, blocking off all entrances. A major drawback is that it is very tedious to clean up. The sand can be made as tall as necessary depending on how many entrances there are. However, setting up the system is comparatively tedious. As of 1.1.1, sand can now be placed on active stone blocks, and using wiring and a switch, trigger the stone block to be active therefore dropping the sand onto any monsters.

Tower Method of Self Defense

Utilizing a similar method to the floating base however it is connected to the ground when it is locked down using two sand traps to block the bottom of the tower. The tower uses two platform traps to allow harvesting of Demon Eyes. The traps can be made into any preferred size. The advanced versions of the tower can use a secondary sand blocking system.

If enough Dart Traps, wires, and pressure plates are obtained, then a dart trap defense can be created as shown below, simply put, when this many dart traps are wired up, the player can effectively fight blood moons, goblin armies, and frost legions from the comfort of home.

Farming is a new addition, as of 1.0.5. The player uses seeds obtained from flowers to make more and more flowers, in a way that it is close to home and easy. Certain farms will have certain things, such as hatches to allow water/lava in (for Fireblossom or Waterleaf) or chests that hold everything they may need, like buckets and seeds. Farming allows potions to be made much easier, because the plant ingredients will be growing, and if they are grown right, seeds can be harvested out of them. As a part of 1.3.0.1 a Staff of Regrowth can be used to get more potion flowers and plants.

'Hellevator', also known as 'Hellvator', is the Terraria jargon for a drop from the main land to The Underworld (Hell). It is a portmanteau of Hell and elevator, for obvious reasons. Usually at the bottom of a Hellevator is Water, since it removes fall damage, but Cobwebs, Dual Hooks, Grappling Hooks, Ivy Whips, a Lucky Horseshoe, Wings, a Cloud in a Bottle, Spectre Boots or Rocket Boots can also be used.

A home is a safe haven for players or NPCs where they can spend their Nights without fear of attack under most conditions. If Blood Moon has risen, during which Zombies can open doors, or a Goblin Invasion has begun, in which goblins can open doors, the home is no longer a guaranteed safe zone unless the doors are blocked with bricks. The only mob that poses a problem then, is the Goblin Sorcerer. The home can take various forms, ranging from a simple shack to an elaborate mansion or even, the famous World House. Usually, the first home is a room with wooden walls, a crafting station, one or two doors, one or two light sources (usually torches), and background wood walls. After that, the player can take one of the many developing paths:

- Building outposts near important landmarks or to have safe places to rest.

- Link different spots of the map.

- Or simply develop a main house into a giant castle.

- Build a Skybridge, linked or not.

A liquid generator is a structure that is used to create more water than is used in the process. Liquid Generators are useful if one wishes to flood large parts of the world (most notably, flooding the Underworld with water), and they are typically used for building Obsidian Generators, which are designed to create infinite amounts of Obsidian.

A skybridge is a player-made level surface, built at a reasonably high altitude, that spans part or all of the world's horizontal length. This is primarily used to: collect Fallen Stars (as they will fall on the bridge and can be collected by running across the Skybridge), find Floating Islands, and grant an easy route to other parts of the map (Dungeon, Underground Jungle etc.). The main con about this structure is that if Meteors fall on it they will grant very little Meteorite Ore. However, if the skybridge is high enough (about 10 blocks below the top map limit), Meteorites may land in the ground, but fallen stars will stlll land on the skybridge. This is maybe because Meteorites start falling under that level and skip the skybridge, but fallen stars start falling from the top of the map.

However, high altitude enemies will still spawn, like Harpies and Wyvern in Hardmode-which has surprisingly high damage output, so weapons and preparation are recommended.

There are many kinds of traps that players can create with a variety of functions, both for dealing with monsters and for PvP. These include wooden platform traps, which can trap flying enemies; lava traps, which can be used for automated farming of enemy drops; and pitfall traps, which are used in PvP matches to drop an unsuspecting intruder into something deadly like lava.

To capture water for the shaft build a U shape for the first 2 rows. 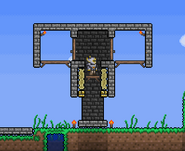 Building some sort of structure that provides cover from flying enemies such as these Eaters of Souls while exploring the Corruption (or any other dangerous biome, including The Underworld).

A Terraria house. Note the custom-made everything-proof outside doors.

This is a tower with a couple of "Flying Enemy Cages" and 2 lockdown towers, also some lava pits with a "Prevent-to-jump-over-pillar".

This is the rest of the tower, not much defensive here, but that is not needed cause the only enemies that will get there are the flying ones.

This is a Boss arena. The arena itself, (Without traps) is good for fighting The Destroyer, and the EoW but it is not corrupted.
Community content is available under CC-BY-SA unless otherwise noted.
Advertisement