“A dormant, yet powerful floral guardian awoken by the fallout of Cthulhu’s machinations. Its reach spans the entire jungle.”

Destroy a Plantera's Bulb in the Underground Jungle.

100%
Only one of the following will be dropped:
100%
Nettle Burst
16.67%
Wasp Gun
16.67%
Venus Magnum
16.67%
Flower Pow
16.67%
Leaf Blower
16.67%
Grenade Launcher
(& 15-49 Rocket I)
16.67%
Regular drops?
100%
5-15 Greater Healing Potions
100%
Plantera Mask
14.29%
Pygmy Staff
25%
Seedler
14.29%
Seedling
5%
Spore Sac
(Expert Mode)
100%
Temple Key
100%
The Axe
2%
Thorn Hook
10%
Plantera is a Hardmode boss fought within the Underground Jungle biome. In order to summon Plantera, the player must first defeat the Wall of Flesh and all three Mechanical Bosses (The Twins, The Destroyer, and Skeletron Prime). After doing so, the player must then destroy a small pink bulb found in the Underground Jungle known as Plantera's Bulb. There is no limit to the number of bulbs in a world; after all of them have been destroyed, more will spawn. Plantera will become Enraged Plantera with all its stats multiplied by 3 when the player leaves the Underground Jungle. Plantera has less health than most other Hardmode bosses, but is harder and, unlike some other Hardmode bosses, can be fought at any time of day.

Plantera's main body appears to be a massive pink flower bulb, much like the plant that it was summoned from. It uses 3 vines to grab onto solid terrain to move. The vines do not inflict damage while the "claws" on the ends do. If the player were to make it chase them into the daylight, it would move faster than normal in the open daylight than underground. It shoots sharp leaves that do relatively little damage, which fire faster as its HP drops. There is also an intermediate stage at around a quarter of its HP lost, where it starts shooting pink spiked balls that bounce off of walls, making it almost suicidal to fight in tight spaces. The fire rate of the spiked balls also gets faster as it approaches the second stage.

After losing half of its HP, Plantera loses its petals to reveal a carnivorous plant-like body and a multitude of tentacle-like vines (besides the 3 used for movement) which behave similarly to The Hungry. It stops shooting projectiles at this stage and increases its speed and decreases in defense. This is a perfect time to use Ichor based weapons (Which needs the Crimson to be loaded in the player's world or brought from another world with Crimson in it) to decrease its defense even more, in order to kill it faster.

There are significant differences in Plantera between normal and Expert Mode worlds.

It is highly inadvisable to fight Plantera on the surface or outside of the Underground Jungle since it enrages and deals far more damage than usual. When enraged, Plantera is capable of killing the player instantly when hit, even with projectiles. It may be possible to defeat it using a surface technique, or similarly kiting it to a different biome (such as the Underworld), however top tier equipment and weapons would be required. Take care to ensure the location Plantera is engaged at isn't at the edge of the Underground Jungle or above a depth of 0 (use a Depth Meter or the GPS to check). Both of these things can trigger an unexpected enraged boss, significantly lowering any chance of survival regardless of the strategy. The use of auto-healing weapons is recommended as well, such as vampire knives, or mage weapons while the Spectre Armor (With hood) is equipped. (This can only work for farming Plantera, as both the Spectre armor and Vampire knives are only obtainable after Plantera is defeated).

This method is executed by simply excavating a large area in which the player can fight Plantera. This method will work well with most gear load-outs and can be a simple yet effective way of defeating it. By digging out a large circular space (The Underground Jungle has a multitude of similar spaces that only require a little cleaning up) and placing rows of platforms across its diameter, it becomes possible to apply different kinds of boss strategies such as Kiting. For this strategy, it is advisable that the player uses buff potions and places health regeneration items such as Campfires and Heart Lanterns down around the arena. Another arena setup is to build a grid in which the player can go up down left and right without using flight and if the player uses speed boosting accessories, they can increase speed when running because the player is not constantly flying. A fast and efficient weapon to defeat Plantera is the Clockwork Assault Rifle, as it fires faster than the Megashark when reforged and the first shot does not consume ammo. It also fires three round bursts, effectively better at ammunition conservation.

This method is recommended if there is no access to powerful equipment (such as gear that is required to defeat Plantera) yet and need a reasonably easy way of challenging this boss with a good chance to win.

For this method, a vertical shaft (see Hellevator) at least 3 blocks wide will be dug from the top of the Underground Jungle down to where lava pools begin to appear. Make sure neither end of the shaft is outside the biome. This doesn't take too long as mud mines up fairly quickly and the biome usually contains many open areas to which excess water can drain. The ideal location for this shaft would be in the center of the Jungle so that it can be quickly reached from anywhere a Plantera's Bulb is found. It could also be placed between two major Jungle cave systems in which the Bulb might spawn.

Items necessary for this method are Wings or other flight & slow-fall item and a Grappling Hook or similar item. Weapons used for this method are the best damage ranged weapons or spells available to the player. The Hallowed Repeater paired with Chlorophyte Arrows is sufficient. High Armor ratings, the Cross Necklace, and the Philosopher's Stone are not required but make this method easier.

To begin the battle, destroy a Plantera's Bulb and kite the boss to the hellevator, taking care not to get too far away causing it to despawn. Then fall/fly slowly down the shaft while Plantera chases the player, constantly shooting it with ranged weapons or spells. If it begins to get too far away, attach to the wall with the grappling device until it catches up, then resume slow-falling, shooting all the while. When the bottom is reached, simply fly back up through the shaft and attach to the wall to shoot Plantera as it catches up. When the top is reached, fall/fly back down and continue as before. Plantera doesn't follow the player in straight lines, so many of its attacks will miss since they do not pass through the walls.

This method works very well for Plantera's second form if it is dealing too much damage for the player to keep up healing while using the Tank method without Vampire Knives.

An easy but expensive way to beat Plantera is by digging a long horizontal tunnel in the jungle, and attaching two Teleporters on both sides. Then, using a Megashark with Crystal Bullets or, for end-game players, the Terra Blade is also recommended. Shoot it while it approaches and teleport to the other side when it gets too close. Repeat the process until it dies. Hallowed Armor or better should be used since this method does not guarantee complete safety. Also, any extra damage items will speed up the process. Otherwise, nothing else is needed for this method. Other viable weapons for this method would be the Golden Shower or Ichor Bullets paired with a Megashark or better. Beware, Plantera will despawn after teleporting if the tunnel is longer than 150 blocks.

The player should make a giant circle, have wings and Hallowed Armor on or better, and have a Mushroom Spear. To implement the core function of this strategy, the player will have to rapidly jab at Plantera with the spear while flying circles around it, being careful to avoid getting hit. This method takes around 5-7 minutes to complete the battle with.

The player clears out a large slab of the underground jungle maybe 100x100 or, to be safe, 300x300. Have a lot of platforms so the player can jump or fly straight through the platforms then fall as fast. When the player has done this they can put heart lanterns and campfires around the arena (if they so wish, it is not needed because the vampire knives heal hp fast). Then the player is ready to go and beat Plantera with vampire knives.

(Please note that this method can only be accomplished after Plantera has been defeated once due to the crimson chest only being able to be unlocked legitimately in a hardmode dungeon).

Build a house near a Plantera bulb with a bed. Set the player's spawn point there. No matter how many times the player dies Plantera won't despawn.

An option for killing Plantera for the second time (after accessing the temple). 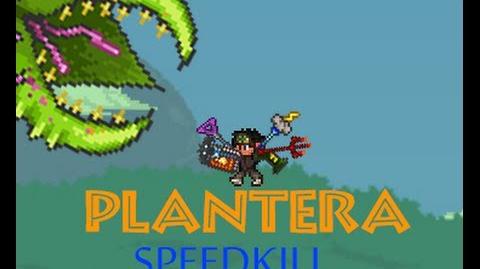 Image of Plantera taken from the 1.2 trailer.

Plantera's Bulb in an Underground Jungle after defeating the Wall of Flesh. 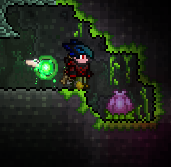 Unreal Grenade Launcher dropped by Plantera (Other loot dropped by 10 other Planteras).

Plantera in the lihzahrd temple 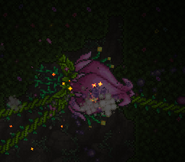 this will help with plant