ℹ️
100%
Pink Gel (25-50)
100%
Slime Staff
1%
Pinky is a very rare Slime, and is notably smaller than (most) other slimes. It can be found on the surface and in shallow caves in the Underground. It can be very frustrating to try to farm due to it's very rare spawn rate, which makes acquiring the Molotov Cocktail difficult. 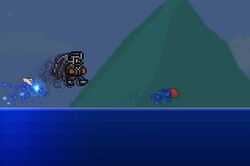 Pinky in the Ocean

Pinky on the Surface

Pinky in the Underground Jungle