Mythril Bar
Mythril Brick
Mythril Ore is the fifth hardest ore in the game. This mineral can only be mined by a Cobalt Drill/Pickaxe or higher. It is found rarely around the world, mostly in the rock layer, or below -600 feet.

Mythril Ore can be spawned into your world by breaking a Demon Altar or a Crimson Altar with a Pwnhammer or Drax. This also applies to other types of ores, such as Cobalt and Adamantite. Upon breaking a second Demon Altar after first loading the world, the Mythril Ore will be placed in your world and the text "Your world has been blessed with Mythril!" will appear.[1] Mythril Ore, together with Cobalt Ore and Adamantite Ore cannot be broken with Explosives.

Mythril is required to craft Mythril gear. It must be smelted into bars at a furnace, however. 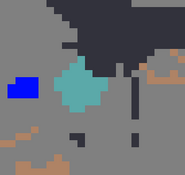