Light Disc
14.29%
Only one of the below will drop if the Mimic is of the ice variety
100%
Flower of Frost
31.67%
Ice Bow
31.67%
Frostbrand
31.67%
Toy Sled
5%
Mimics are a type of enemy that look like wooden, frozen, golden or locked shadow chests. They will stay still initially, but will reveal themselves by jumping and biting the player if he/she moves within their attack range. Another way to reveal a Mimic is to shoot it from a distance. If the chest is a Mimic, it will take damage and move to attack the player, revealing itself in doing so.

Unlike regular chests, Mimics will not glow while under the effects of a Spelunker Potion, making it easy to differentiate between a Mimic and a standard chest. They do, however, glow under the effects of the Hunter Potion. Similar to their passive counterparts, Mimics are usually found underground, but can rarely appear on the Surface in front of natural background walls. Mimics will also appear on maps for the console version of the game. A Lifeform Analyzer will detect all types of mimics making finding slightly easier.

The Mimic is a Hard Mode monster, so it cannot be encountered naturally before the Wall of Flesh is defeated. Mimics can be spawned by powering the Chest Statue, but they will only drop the Mimic Banner when spawned this way.

If you see a chest on the newly made surface, it's obviously a Mimic.

Mimic and Normal gold chest Very close to each other. The mimic (right) is comparatively narrower. Furthermore, it has spawned sitting on just one block. 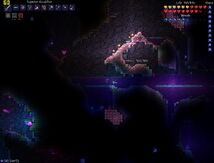 A mimic that has spawned on a bugged chest. 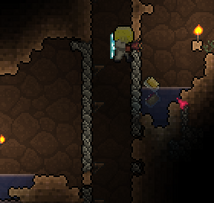 A Mimic that attacks the player through a Hellavator.

An Ice Mimic attacking the player.