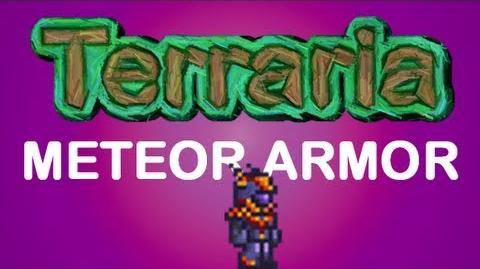 With the full set, the Space Gun does not need mana to fire and can thus be fired an infinite number of times, and will do three extra damage, for a total of 21 damage per shot without additional modifiers. A total of 65 Meteorite Bar or 195 Meteorite Ore is needed to craft the full set and the Space Gun. The Space Gun also makes the WoF (Wall of Flesh) boss fight easier as it does a reasonable base damage with a fast speed and unlimited ammunition while piercing.

When the complete Meteor Armor is equipped, visible flames will be emitted from the player during movement. As of version 1.0.6 the Meteor Armor no longer gives light when moving but it still retains the sparkly flames trail effect. The full Meteor Armor set must be equipped in the armor slots - not the social slots - for the set effect to work.