Sells wiring related items
The Mechanic is an NPC that sells items such as wrenches, wire cutters, levers, etc. One can find a bound mechanic in the Dungeon after defeating Skeletron. Right clicking on the mechanic will unbind her, and after that point it will be possible for the new NPC to move into a house. This works the same for the Wizard and the Goblin Tinkerer. Although the Tavernkeep and the Angler are found as well, they are different scenarios. 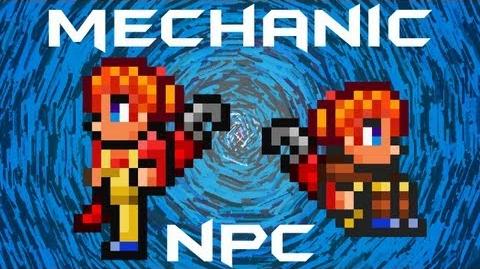 Throws her wrench that acts as a boomerang when an enemy is nearby. It appears that her wrench can pass through enemies, thus useful against groups.

Bound Mechanic in a Dungeon

Bound Mechanic beside a golden chest.