Mythril Anvil
Orichalcum Anvil
The Magical Harp is a magic-based weapon that produces musical notes that bounce off of walls, causing damage to enemies upon contact.

The speed of these notes varies, dependent on how close your cursor is to your character, ranging from moderately slow to very fast. Using this, the player can either cause lots of damage to a single enemy as the musical note passes through the enemy slowly, or deal damage to multiple enemies with a swift barrage of fast-moving notes.

The Frostburn effect due to wearing Frost Armor, despite how Frost Armor is only supposed to give the bonus to ranged and melee attacks. 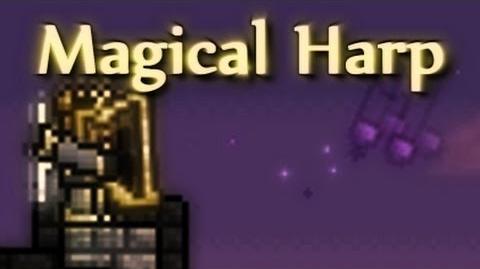 Terraria - Magical Harp, how to craft and use
Community content is available under CC-BY-SA unless otherwise noted.
Advertisement