Sky Fracture
The Magic Missile is a spell that summons a shimmering projectile that can be launched and controlled by pressing and holding the left mouse button. It also changes color throughout use. 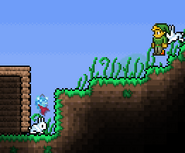 It's easy to hit monsters that are in tight places.

The magic missile cuts through vines with ease.
Community content is available under CC-BY-SA unless otherwise noted.
Advertisement