Lava is a Liquid found commonly in large pools once the player has reached a certain depth (about 1200-1500 feet below on the Depth Meter). It will cause a large amount of damage to the player and monsters, and falling into Lava is often fatal unless relevant immunities are in place.

If Water touches Lava, the Lava turns into Obsidian.

Burrowing Monsters and monsters native to the Underworld have an immunity to Lava Damage.

When Lava comes in contact with most placed items, it will burn through them. However, Lava will not burn through regular Wood Blocks and Ice Blocks, and will also not burn through closed Wooden Doors (though as soon as the door is opened it is destroyed).

Lava will destroy all grass, moss, and vines that it comes into contact with. Vines will be destroyed instantly but grass and moss can survive Lava for up to a few seconds. Lava also prevents grass or moss spreading onto blocks near or in contact with lava.

Lava was thought to incinerate dropped items that are 100% covered by a Lava tile; however, further experimentation has shown the amount is closer to 25%. The optimal way to create a trap is to have 1 bucket of Lava for every 6 to 8 blocks of the trap, this way it still damages the player and creatures without destroying any Coins or loot.

Players and most monsters who are harmed by Lava will always receive the "On fire!" debuff.

Build a large pit 1 block deep, and another pit below that pit. Pour a bucket of Lava into the top pit and scoop it back out, then mine a hole to allow the remaining lava into the lower pit. The player can then take that Lava with the bucket.

This procedure can have varying results; sometimes it will work properly and the player may even have Lava left over in the lower pit. Other times it can be less successful, only yielding one duplicated bucket per two normal ones.

Blocks cannot be placed in Lava. However Sand, Ebonsand, Pearlsand, Crimsand, Silt, and Slush can be placed above the Lava, and it will drop to the bottom. A lava pool can be filled in this way. The player can exit the world, re-enter the world, mine the gravity-affected block, and the Lava will be gone. 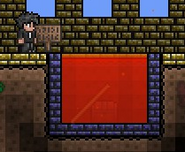 Filled chests will not be destroyed by lava 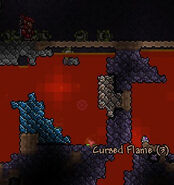 Cursed Flame and Souls of Night submerged in lava

Lavafalls can be used to illuminate bridges across the Underworld