“Slimes normally aren’t intelligent, but occasionally they merge together to become a powerful force to swallow all things.”

1:300 chance of replacing a normal slime during

Killing 150 Slimes during Slime Rain, or 75 if King Slime has already been defeated in the world
Slime Crown

When damaged, Blue Slimes and Spiked Slimes (Expert Mode only) will break off of it and the King Slime itself progressively shrinks in size. It drops a random piece of the Ninja Set upon death.

An advisable strategy for beginners is to make a small box in the ground with the top open. When King Slime comes, if the player stays inside the box, King Slime WILL NOT be able to touch the player and the only problem will be the blue slimes, which will easily die to the Muramasa or other swords.

A different but equally effective method for beginners is to build ropes straight up at least 35 blocks high (although you can go higher to give yourself some margin of error), and attack the King Slime from the top of the rope tower with ranged weapons. The King Slime cannot jump high enough to hit you when you are at the top of the ropes, and it can't teleport to you when you are on rope, so you are safe from all damage caused by the King Slime or the blue slimes it spawns. (No longer works in 1.4.0.1)

Another tactic is the hit-run tactic, means approach the King slime and get a few good blows and retreat when it is about to jump. While retreating, you could hit it with long-range weapons like the Bow.

An alternate strategy is to make a T shaped tower at least 11 blocks tall, as shown in the gallery. At this height, ground-based mobs can't touch the player and even King Slime can't get itself into the "airlock." However, a weighted weapon or a boomerang may be needed if King Slime is still able to cause damage.

Place two blocks above the player's head with a two block space in between and the King slime cannot reach the player, (however the blue slimes that are knocked off of the King Slime can still reach you). The player can then swing at it from all directions.

King Slime can't swim, so a good idea would be to make a deep pool (About 5 blocks deep) and make it at least 10 blocks long. The King Slime will be under water, while the blue slimes float up to the surface of the pool. This makes it possible to kill the King Slime while avoiding the blue slimes until the end of the battle. Breathe using a breathing reed, or you can just stay underwater if you have enough HP to spare. (King Slime now floats as of 1.0.5) Note: Most of these methods are not very effective due to the 1.3 patch, thanks to the devs giving him the

ability to teleport. Still, a Minishark may work properly with Hermes Boots or Spectre Boots.

However since he needs blocks to teleport to, you can use a massive chain of ropes and he will not be able to reach you. The fight can be easily done with ranged weapons. (King Slime now teleports up ropes as of 1.4.0.1)

A simple 10 high x 14 across King Slime trap. Use a wooden platform bottom or a two block high opening in the side to attack.

A very simple design using only two dirt above your head not allowing the King Slime to reach you. 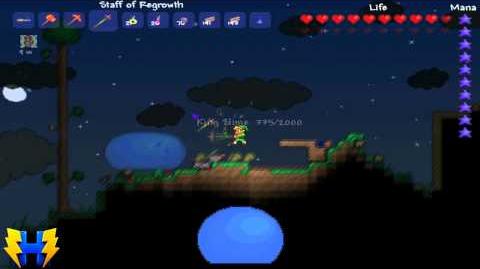