Allows flight and slow fall
Hold up to rocket faster

Between New Moon and Full Moon

The Jetpack is an accessory bought from the Steampunker NPC. Just like Wings, it enables flight and slows a player's fall; the main difference is that it allows faster ascending movement. This, however, does not allow a player to go higher, making the player glide faster as height limit is reached faster.

Because of the momentum after-effect of rocketing at an excessively fast rate, it will propel the player slightly higher than rocketing at a regular rate, however, due to how fast it is, it can be difficult to efficiently utilize unless the player has a plan laid out beforehand for what exactly they're trying to accomplish.

Dyeing the jetpack will affect the jetpack and the flame effect emanating from it, but not the actual flame particle effects that come out of it. 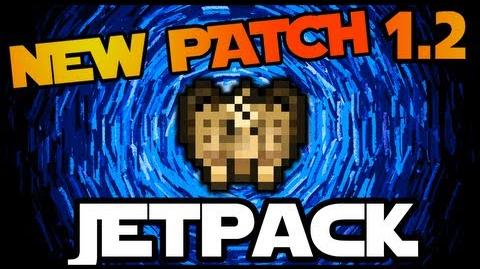