)
33.33%
The Ice Golem is a miniboss which only spawns during a blizzard in a Snow Biome after Hard Mode is activated.

The Ice Golem is instrumental in the crafting of the Frost Armor and Frozen Wings. He is the Snow Biome counterpart of the Sand Elemental.

Ice Golems are hostile and thus attack the player. They move slowly, but will fire a laser which can inflict the player with the debuff "Frozen". They are affected very little by knockback, and have a low jump height of only about 3 blocks.

Another way is to place blocks three to four blocks from the surface near a possible Ice Golem spawn area. When spawned, the Ice Golem will get trapped by the blocks, making it safe and easy to deal damage with ranged weapons.

Because of its low jump ability, a player can make a 5 block tall wall, and then break the first 3 blocks, making it impossible for the golem to hit the player, while still allowing players to be able to kill it with any weapon.

A third strategy is to make a platform that's about 5 blocks thick and 15 - 20 blocks long. Then make a 2 block wide (diagonal) peephole so the lasers cannot hit you. Once the golem spawns, lead him to the platform and make him diagonal from the peephole so you can shoot him. It is also recommended to make a hole diagonal from the peephole so it cannot leave the spot where you shoot him. When you lead him into the wall/spot, shoot him with a fast gun (Phoenix Blaster, Megashark, etc) so the strategy is complete. Then he will not be able to hit you, and you can kill him carefree. 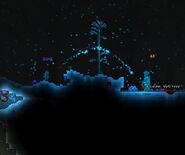 Using terrain to your advantage

Fighting Ice Golem underwater, hiding behind the ledge to avoid his lasers

An Ice Golem in a snow cave

The old sprite for the Ice Golem.
Community content is available under CC-BY-SA unless otherwise noted.
Advertisement