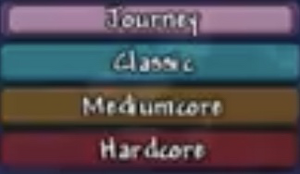 Not to be confused with Hard Mode, the world mode which is unlocked by defeating the Wall of Flesh.

Hardcore Mode is a character-specific difficulty setting that can be selected when creating a new character. Character names that are set in Hardcore Mode are tinted light pink. Created Hardcore characters cannot be changed back to any other difficulty. Once the player dies, everything in their inventory is dropped and the character is deleted. They are given the basic starting equipment (Copper Shortsword, Copper Pickaxe, Copper Axe), and both health and mana are set to their defaults (Health:100 Mana:20). From the time the players dies until the time he/she disconnects, he/she will be a ghost, which is not visible to other players, provides no light, passes through walls, and cannot interact with anything. A Tombstone is dropped and inscribed with whatever message appears at the bottom of the screen when the player dies. 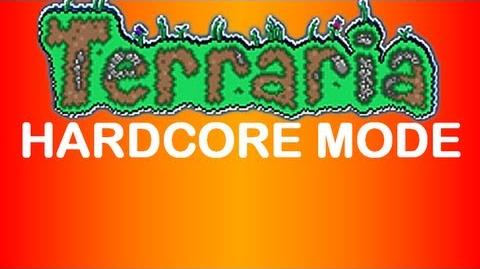 Here is a list of tips for dealing with Hardcore Mode: