There is a variety of Guns available in Terraria with increasing damage and/or speed as the player acquires stronger and stronger guns. The guns range from early to modern styles and designs, from the Flintlock Pistol to the Phoenix Blaster, Megashark or the Chain Gun.

As of the PC 1.0.6 update, the total amount of ammunition available shows up underneath the gun when in the hotbar, whether they be Musket Balls, Silver Bullets, Meteor Shot or even Sand, Snowballs and Fallen Stars for the Sandgun, Snowball Cannon and Star Cannon respectively. Guns that can use multiple types of ammunition will show a grand total of all available ammunition if more than one type is available in a player's Inventory.

Some guns are easier to obtain than others. The Handgun, for example can be found in Gold Chests in the Dungeon. Some guns, like the Clockwork Assault Rifle can only be obtained by defeating certain monsters. In this case, the Wall of Flesh. Still others (as a few examples, the Minishark, Flintlock Pistol, the Gatligator, or the Shotgun) can be bought from the Arms Dealer or other NPC vendors.

A fantastic early weapon is the Musket. For many players, it is the first firearm they obtain. It uses a minimal amount of bullets and offers a good knockback and fair damage, although its rate of fire is quite slow. It is probably one of the most accessible guns, being found by smashing Shadow Orbs in The Corruption. It is considered a must-have because it is one of the easiest weapons to find, thus causing the Arms Dealer to spawn. It will use all common forms of ammunition (Musket Balls, Silver Bullets, or Meteor Shots and other common bullets).

In worlds that have The Crimson in place of the Corruption, players will find obtaining their first weapon even easier. There are no chasms to fall all the way down and die from fall damage, being replaced by steep but easily traversed zigzagging tunnels. Destroying the Pulsating Hearts found within will always yield The Undertaker as the first drop, as well as some Musket Balls. It does less damage than the Musket but has a higher rate of fire.

Most guns use Musket Balls or variations of this ammunition as well as bullets made from the Empty Bullet.

Unique firearms have their own forms of ammunition, for example: 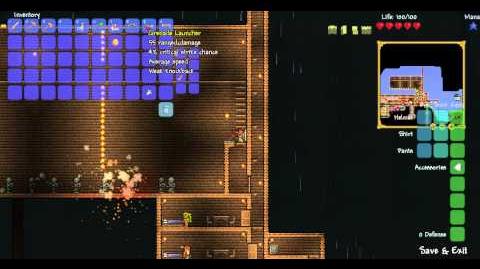 Area of Effect weapons (i.e., explosive guns) do damage in a predetermined area which will damage more than one enemy and (depending on the gun and the ammo type) sometimes even the terrain. The Proximity Mine Launcher, Grenade Launcher, Rocket Launcher, Snowman Cannon, Celebration and Stynger are all Area of Effect weapons (although the last causes multiple explosions instead of just one, being less predictable in the exact effect area).

Note: Please keep in mind that "Base Damage" refers to the damage before Accessory, Armor and Buff bonuses are applied.

It is worth noting that, although some weapons have the word "gun" in them (i.e. Space Gun, Bee Gun, Rainbow Gun), they are not technically guns as they deal magic damage and are labeled as Spells regardless.