'You are a terrible person'

Wall of Flesh
(When dropped in Lava in the Underworld)

The Guide Voodoo Doll is used to kill the Guide, and is dropped by the Voodoo Demon 100% of the time. When equipped in one of the accessory slots, it allows the player to attack and kill the Guide.

As of 1.1, if the Guide is alive, and a Guide Voodoo Doll is dropped/thrown in lava, while the player is located in the Underworld, the Wall of Flesh will be summoned (if it wasn't present), and the Guide will be killed. Therefore, killing Voodoo Demons in the Underworld carries the risk of the Guide Voodoo Doll accidentally falling into lava, summoning the Wall of Flesh. The boss is not summoned if the guide is already dead.

It is 1 of 2 voodoo dolls in the game, the other being the Clothier Voodoo Doll. It's also the only boss-summoning item that works in this way. 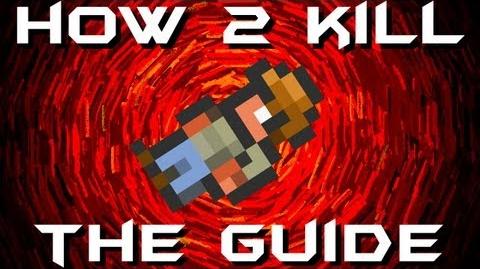