Iron Anvil
Lead Anvil
The Grappling Hook is an incredibly useful and practical tool, used to grab on to surfaces. It can be used on all solid surfaces and is helpful for navigating caves and building homes as you can use it to cut vegetation.

It does not need to be placed in the hotbar to be used as it has a designated hotkey, (default is E [LT on Xbox]) and, after pressing, the grappling hook will be fired in the direction of the mouse. However, it does have a limited range. It can grab onto a Wood Platform.

You may use other tools at the same time as you are grappled onto a wall, but note that destroying the block you are attached to will break the connection causing you to let go and fall. If connecting to a mud block in mid-air you will keep taking damage. 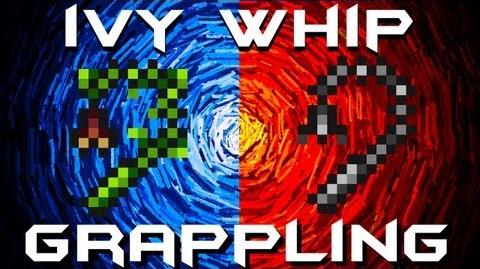 Grappling hooks can be used to pass through a chokepoint that you would not normally fit through. The endpoint still needs to be at least 3 blocks high and 2 blocks wide, but you can pass through a more narrow gap to get there. As an example, face left in a three block high, horizontal tunnel. Dig the two blocks above your head on the left, and the three to the left of that, starting with your head level, and the two above. You will not be able to jump through that gap, but you can grapple through it.

The grappling hook is an absolute necessity for mining and exploring, and is a massive help as it helps players reach heights and areas otherwise impossible to reach. Players can also use it for quick escapes from water and mobs alike. As an added perk, by firing the grappling hook at the ground while falling, fall damage can be negated; however, it should be noted that the grappling hook should be fired about 2 seconds before impact, or else the grapple will not hit the block before you do.

Glitch with using the grappling hook

Grapple Hook being used to get to a ledge