Gold Bar
Gold Brick
Spelunker Potion
Gold Ore is a mineral obtained mainly underground, though rare surface sightings are possible. It is less common than Iron, Silver, and Copper, and is normally found in formations of 5-30 blocks. Gold Ore is the strongest Ore to spawn on the surface layer. It is one tier below Demonite and one tier above Silver.

Gold Ores can be mined with any pickaxe and then smelted into Gold Bars, which can crafted into furniture, tools, armor, or weapons. 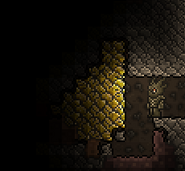 A large pocket of gold. 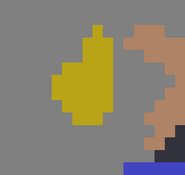 Gold viewed in the mapConsole 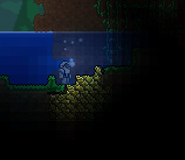 A pocket of gold found on the surface.