Allows the Reforging of items and the purchase of certain other items
The Goblin Tinkerer is an NPC added in the 1.1 update. He reforges items, giving them different stats. He also is a vendor NPC, which means that he can buy and sell items. He also exclusively sells the Tinkerer's Workshop, which is a crafting station used to combine accessories. 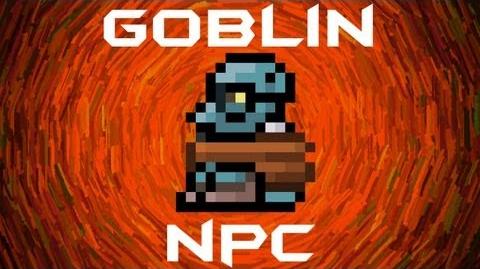 In order to spawn the Goblin Tinkerer in a world, the Goblin Army must be defeated at least once. He can then be found anywhere underground, even in the Dungeon, bound much like the Mechanic or Wizard. The Goblin Tinkerer will need to be rescued by right-clicking on him (pressing B on console). He may be found above or below sea level, though he is usually in the rocky layer. The player can make a pathway below sea level and run across it to spawn the Goblin (this may also work well with the Wizard) and then unbind him.

Tosses Spiky Balls at nearby enemies.