A Generator is a contraption with the specific function to provide the player with an endless supply of certain resources. As for 1.1, only liquids and few items can be produced by them.

The Liquid Generator exploits a minor glitch that causes the outlet Pumps to create more liquid than the matching inlet Pump removes, therefore increasing the amount of liquid.

Create a container, place the Inlet pump in it and fill it up with the desired liquid until the pump is fully submerged. Then, set up an Outlet pump so that the outgoing liquid falls into the container. Link the pumps to a timer and activate it, and the liquid will eventually fill it up. Take care not to leave it on too much, or you'll risk spilling liquids (especially lava); you can box the generator in to avoid such an occurrence.

The type of timer used determines the speed at which the liquid will be produced.

The most foolproof way to duplicate liquids is to:

Repeat as needed, of course this does not have to be a small W shape, there just needs to be one block separating the contents of your Bucket so that there is exactly half a bucket on the right side. This method works flawlessly for both Lava and Water. Honey also works with this method.

A different (and perhaps simpler when mastered) method to duplicate liquids is to: 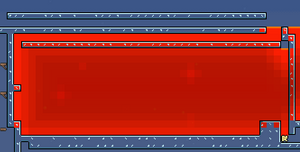 A more convenient way of duplicating large scale of liquid is to utilize a glitch in the game.

If you did this correctly the lava should endlessly fall without the container actually losing any liquid. With a container the size of the one in the picture, it is needed to minimize the amount coming out at the same time to prevent this method from failing. To do this, create a tiny hole that the lava has to travel through horizontally, in this case the space to the right of the sand block. When using a larger container the holes may be bigger (the extension that is needed may be removed and eventually a larger gap may be created) and a larger amount of liquids may be duplicated per time.

Be careful: if too much liquid is moving at once, all the liquid will reset; It'll skip the falling process and just end up filling what it actually would. Don't worry, it takes a lot of liquid for this to happen.

The reason this glitch works is because liquid values are integers, each block has a value of 256 that specifies how much of the block is filled, so a filled block has a value of 256 and a half-full has value 128. When the lava values differ, the engine tries to distribute the values evenly over time, but it has to round off somewhere. The idea behind this is that if you let the engine distribute 255 and 256, it fills both blocks completely. This is why you need a large container: Basically, when a bit (say 8) drips out of the exit, the engine distributes this so that two blocks miss 4, after that four blocks miss 2, eight blocks miss 1, and finally 16 blocks miss half a 'value', which it then rounds to fill up those blocks completely. This way, a tiny bit can keep pouring out while the container stays full.

This method is an easy method used to endlessly duplicate water and is rather easy to achieve. although this method may be considered the slowest way.

Water should endlessly fall from the gap and fill up whatever container is at the bottom of it. Water will usually keep falling forever until liquid settles.

The picture to the right shows the process, although the first three pictures have the wrong 'shallow hole' size.

Note: infinite waterfalls can also be created by pouring water next to a half-block. When flowing over it, the Water will not drain from the source. It will flow over ground like normal water; However, if it hits water it will not raise its level.

Liquids may also be duplicated using pumps. This is the lazy man method to duplicating lava as it only need the setup and a little starting liquid.

Note: This method may be rather slow at first, and may need more starting fluid than just one bucket. Having multiple pumps will increase the duplication rate but you will need a lot more starting liquid for it to work. Some experiments have been done using a multiple pump circuit, not connected to each other, and it appears as though it may be quicker to use multiple pumps, rather than just having one.

The Obsidian Generator is meant to produce large quantities of Obsidian for building, storing, or sale (via the production of Obsidian Skulls).

Start by constructing a Water and a Lava generator next to each other.Be sure to close them properly to avoid any accidental spilling.

Then, make a two small "pipes" that link the vats to each other, but make sure the one from the water vat is one block below the one from the lava vat: this way the water, which flows slightly faster than lava, will keep flowing into the same tile every time the block of obsidian is removed.

To farm obsidian from the generator, simply stand under the connection between pipes like the picture on the right, select a pick/drill and hold your mouse on the block:the obsidian will be dropped and placed in your inventory.

This method can also be used to create honey blocks or crispy honey by either replacing the water or the lava with honey.

The loot generator is used to repeatedly spawn and kill monsters from Statues in order to produce various items, which can be sold or used for crafting.

Setting them up is rather simple:wire one or more statues to a timer, set up a simple trap beneath them (a thin layer of Lava to kill the monsters but leave the loot unharmed is ideal, although a volley of Dart Traps may also be used) and activate it. Monsters will spawn from the statues and die, leaving their loot.

Because Hooks sell for 2

each, a loot generator can make a rather

large revenue, depending on the number of statues and type of timer used.

* Bomb statues will drop them directly as an item. No more than 3 can be spawned at once on the screen.

**Bunny Hoods and Corrupt Bunny Banners can only be obtained from Corrupt Bunnies which only spawn from the Bunny Statue during a Blood Moon.

*** Only if the Clothier is present and can respawn; this is however inadvisable as it is slow and will kill all other male NPCs as well.