The Frost Legion (not to be confused with the Frost Moon) is a Hardmode event that can be summoned by using a Snow Globe. It is similar to the Goblin Army in the way that it arrives. When a player uses a Snow Globe (which can only be acquired, legitimately, in hardmode), a message that says "Frost Legion is Approaching from the West/East" will appear on the bottom of the screen. The Snowman Gangsta, Mister Stabby and Snow Balla are the monsters in the Legion. They always drop Snow Blocks no matter what, meaning this event is a great source of snow blocks.

While the Frost Legion is active, Boss 3 music will play. 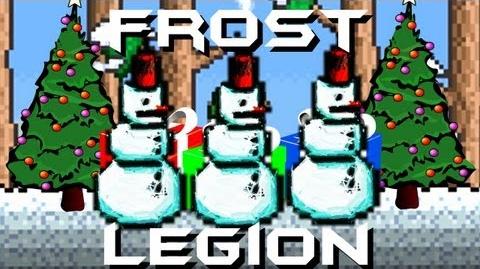 Upon defeating the legion, Santa will move into an empty house and sell the Santa Outfit and Holiday Lights. However, after January 1, whenever Santa spawns he is immediately slain, effectively removing him from the game.

The Frost Legion are somewhat more difficult to kill than the Goblin Army. However, their lack of Sorcerer alternatives makes them easy to kill with ranged gear. Before 1.2 this was the hardest invasion in the game.

A Snowman with a black hat, and holds a Tommy gun.

A Snowman who wears a brown hat, and like the Snowman Gangsta, has a smile. As the name suggest, it throws snowballs.

The melee snowman who wields a stabbing knife. He tends to hop around the most, and occasionally stops to do stabbing behavior. Unlike the other 2, Mister Stabby does not have a smile, nor does he wear a hat.

The only "loot" is snow blocks and coins. Therefore the only real objective is to unlock the Santa NPC.