Disappears after the sunrise 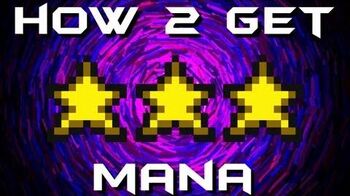 Falling Stars spawn at the top of the world and rapidly fall to the ground. They can be easily found by the light they give off and the distinctive sound they make as they fall. They deal 1000 base damage on the rare occasions that they impact enemies as they are falling, though they will not damage players. However, this happens so rarely and unpredictably that relying on it to happen, for example to help defeat a boss, is not a viable strategy.

Fallen Stars glow in a pulsing pattern like Blinkroot, but are about as bright as a Torch. The light they give off glows through a short spectrum of colors; mainly yellow and pink.

Fallen Stars can be crafted to make a Mana Crystal, which increases a player's maximum mana by 20 when used. Additionally, they are used as ammo for the Star Cannon, a high-damage ranged weapon. Stars launched by the cannon will not vanish in the day.

A fallen star inside a player's house

A brightened image of the Fallen Star bug

Rare sight of 4 Stars together

The Fallen Star Bug In a Hallowed Desert.

(Bug)Fallen star inside a Dungeon wall.