Dynamite destroys blocks surrounding it and deals 250 damage to monsters and 500 damage to the player. Unlike Bombs, it is used more frequently as a mining tool rather than for combat, since it destroys a large quantity (7 block radius) of blocks and takes a longer amount of time before detonation. Dynamite can be found in Chests that are located in caves and/or Floating Islands.

Dynamite can break through Ebonstone and Crimstone, which is useful for reaching Shadow Orbs or Pulsating Hearts if the player has not yet obtained a Nightmare Pickaxe or Deathbringer Pickaxe, but is not as cost-effective as Purification Powder.

They can be stored in stacks of 30 per Inventory slot. Dynamite cannot break Hellstone(until the Wall of Flesh is defeated) or dungeon bricks. Dynamite is the most popular tool used by Griefers because of its ability to destroy almost everything in its large blast radius. 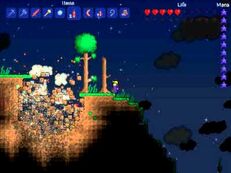 Player using Dynamite to mine
Community content is available under CC-BY-SA unless otherwise noted.
Advertisement