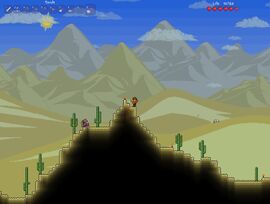 The Desert is a biome composed mostly of Sand Blocks. Cacti and Waterleaf grow in this biome. Antlions, Vultures, and Mummies (hardmode) also spawn in the Desert. This biome has one mini-biome called the Oasis.

The Desert biome has a 1/10 chance to spawn a Desert Pyramid.  The desert finally became a major biome because of its underground ego as of 1.3.0.1. This includes the Antlion Charger and Antlion Swarmer, both of which drop Antlion Mandibles.

In Hardmode, Pearlsand and Crimsand/Ebonsand will appear when The Hallow, The Crimson or The Corruption spread into a desert. These blocks spread Hallow/Crimson/Corruption to other sand blocks, eventually creating converted biomes such as a Hallowed or a Corrupt/Crimson Desert. The two Hardmode deserts are different in several ways from a normal desert:

As of 1.3.0.1 there are 12 Desert-exclusive monsters found in this biome. The following enemies will spawn in the surface:

Along with those enemies found on the Surface, additional enemies were added to the Underground Desert as well:

a house found under the desert

When the player crosses the Desert's border, water changes color to yellow

Pyramid entrance, found on the surface of the desert.