Eater of Worlds
Eye of Cthulhu

The alternative to Demonite Ore is Crimtane Ore.

Note: Image brightness was increased to better show Demonite Ore in the darkness. 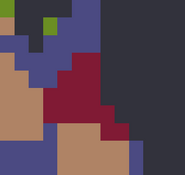 Demonite Ore as viewed on the map.

A trace of Demonite found 1716 feet below the surface.

You can also find it in the corruption!