Cloud in a Bottle

Cloud in a Bottle 53

Allows the holder to double jump

Cloud in a Balloon

Fart in a Jar

The Cloud in a Bottle is an accessory that allows the player to perform double jumps by hitting the jump key again in midair. It will also allow the player to perform a jump while falling, even if the fall did not result from a jump, making it one way to avoid fall damage. A "cloud jump" offers an additional jump of 5 blocks, for a combined jump height of 11 blocks. Its effect does not stack; you cannot equip more than one of any kind of accessory.

It is found randomly in all types of chests, including Dungeon chests, and it is used in the crafting of the Cloud in a Balloon and the Fart in a Jar. 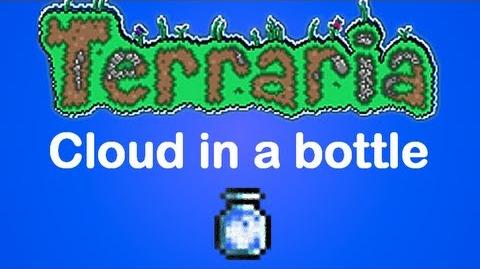 Note: Due to the 1.2.0.3 update, Jump Height is increased, and statistics needs to be updated.