Red Hat
The Clothier is an NPC who sells Vanity Items to the player. One of the things he says when you talk to him is "Thanks again for freeing me from my curse. Felt like something jumped up and bit me." This confirms that he is the Old Man from the dungeon. He will come to town after Skeletron is defeated, and only if there is an empty Home. He drops the Red Hat upon death, and this is the only way to obtain it.

After update PC 1.2 if he is killed at Night while the player has a Clothier Voodoo Doll equipped, Skeletron will be summoned. Also as of 1.2 he no longer sells Black Dye. This is now crafted at a Dye Vat from Black Ink.

There is a bug in multiplayer when you use the Teleporter without standing on it. It causes the clothier to teleport and not take damage from mobs. Although he almost immediately teleports back to his house. 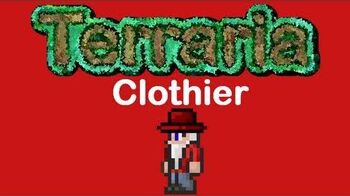 Casts a shadowflame version of the Book of Skulls when an enemy is detected.