ℹ️
100%
Vertebrae
33%
The Blood Crawler is a mob added in 1.2, exclusive to The Crimson. It resembles a light reddish-brown spider, and possesses the ability to climb along background walls. This makes them much more dangerous than some other mobs, as they can crawl right along the wall and attack from any direction.

They can be very dangerous as they can frequently spawn in very large numbers, particularly within the tunnels that run underneath The Crimson. Ranged or magic weapons work much better than most melee weapons against them, although melee weapons with high knockback are very useful at keeping them at bay.

It should also be noted that as long as they are climbing on background walls, they are much less vulnerable to knockback. Due to this, it's inadvisable to take on more than one in melee combat simultaneously. This is because they can easily flank the player when more than one Blood Crawler attacks at a time.

While the Blood Crawler is crawling along background walls, it appears to act like many flying enemies, in that it will rebound from Wood Platforms when it's moving downwards. This can be used to the player's advantage, both whilst fighting and attempting to escape from swarms of them. Placing a row or just a few wooden platforms as one descends can quickly cause Blood Crawlers' speed to be significantly reduced, and clever placement of platforms can even halt them completely.

It is possible to farm Blood Crawlers. However, they may have difficulty in reaching the player if she/he is standing on an outcropping, requiring the player to move back and forth across the pit in which the Blood Crawlers are spawning. They have a slow spawn rate when the player is nearby, so the farming may take a while. It is recommended to have a broadsword. 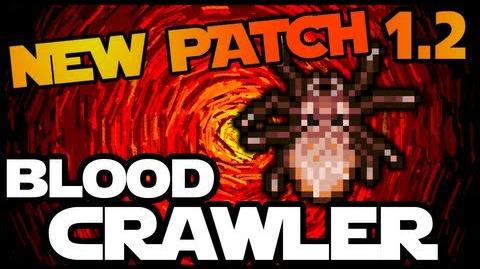 A Blood Crawler on the surface.

A Blood Crawler in the Crimson underground. 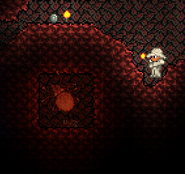 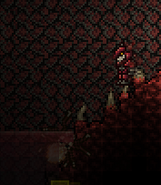