15
The Arms Dealer is an NPC that will move into a suitable house once the player has a firearm of any kind, besides the Flare Gun. The fastest way to get the arms dealer to move in to a house is to destroy Shadow Orbs or Pulsating Hearts (which have a chance to drop a Musket or The Undertaker respectively).

Despite the Flare Gun's name, it does not fulfill the Arms Dealer's spawning requirements because only weapons that fire bullets count towards it.

The Arms Dealer is a vendor who primarily deals in ranged weapons and related items, such as ammunition. To this end, he sells a variety of guns (including the Minishark and Shotgun, which can be found nowhere else) in addition to basic ammunition. 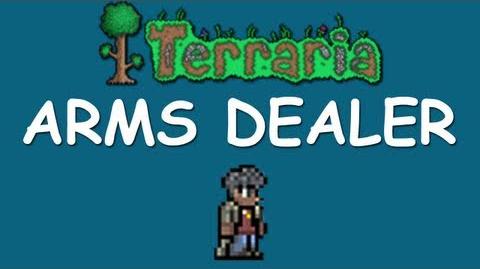 He uses a Flintlock Pistol to defend himself. However, he upgrades it to a Minishark when Hard Mode begins. The Flintlock and Minishark deal the exact same damage, however the Minishark is significantly faster.