Pieces of Armor are items that reduce the amount of damage a player takes by increasing the player's defense. All armor is either crafted at a Workbench, at an Anvil, purchased from NPCs or dropped from monsters. An Accessory can also give 4 defense each with the reforge warding, adding up to 20 extra defense.

Armor items will not grant any defense when placed in the Social Slots, although aesthetic effects created by the armor will still occur. This does not include light given off from the mining helmet.

As of PC 1.1, chest plates of female player characters will differ in appearance from male characters by removal of the abdomen part. However, the helmet and leggings will look the same.

The damage reduction is equal to half of the total defense of the armor worn, rounded up to the nearest whole number. However, the damage taken can never be reduced to less than one point. On a critical hit, the damage is doubled after defense is taken into account.

All of the following (except Bee Armor and Jungle Armor) are crafted at a Work Bench.

Set Bonus: Hurting enemies has a chance to drop "boosters", which apply a buff that can stack up to three times with each level increasing in strength and lasting 8sec per stack. The buffs include Orange (Life Regen), Purple (Mana Regen) and Pink (Damage Increase).

Set Bonus: Solar shields will generate once every 5 seconds up to a max of 3 charges. Once the player gains one charge they also gain a flat 30% damage reduction which is not increased by having more charges. Upon taking damage or initiating a dash which collides with any enemy (requiring at least one solar shield charge to perform a dash) the armor will produce an explosion, damaging enemies in range. Dashing only consumes a shield charge if it connects with an enemy. (All Luminite armor sets cause the player to emit light, with more light for each piece equipped.)

Set Bonus: Wearing all three pieces of the Stardust Armor set will summon a permanent Stardust Guardian which stands behind the player when idle. This guardian defends the player at close range, and can also be directed to a location by double-tapping Down (by default). It has a damage stat of ~20 and deals

summon damage. (All Luminite armor sets cause the player to emit light, with more light for each piece equipped.)

Set Bonus: Double-tapping down (default key) will put the player in "stealth mode". This will render the player almost invisible, will decrease the chance that enemies will target the player, and will also greatly increase damage dealt while slowing movement speed. The damage buff gradually increases to +80% ranged damage and +20% critical strike chance. Moving, grappling and attacking will not cancel stealth, however dashing or riding a mount will. (All Luminite armor sets cause the player to emit light, with more light for each piece equipped.) 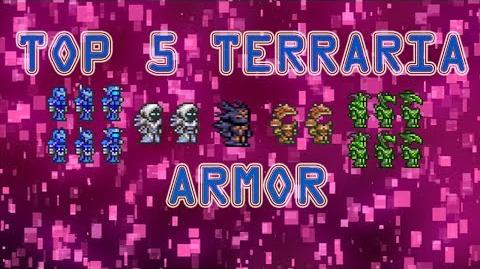 Armors in Terraria 1.3.1
Community content is available under CC-BY-SA unless otherwise noted.
Advertisement