This article is about the PC monster. For the console variant, see Albino Antlion.

)
14.29%
The Antlion is one of the three types of monsters found in the desert, the others being the Vulture and, in Hardmode, the Mummy (not counting desert variants such as the Corrupt Desert). It is also possible for Antlions to spawn in any area of sand that is not a desert biome, for instance, they may spawn in the Ocean, above the sea but still on sand.

If the player does not have a ranged weapon, a good tactic for versing these mobs is to wait for it to shoot, charge at it with a Melee weapon, and continuously hit it from opposite sides. Another good way to fight it is to dig a ditch beside it until half its body is visible and shoot at its side from below and to the side, as the Antlion will only shoot upwards. 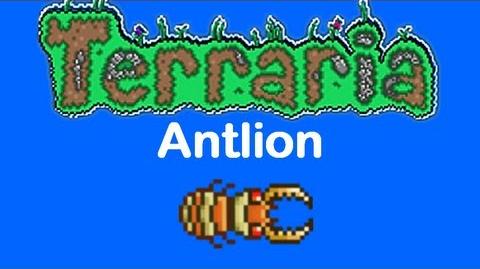 The Sand Blocks around the Antlion can be removed without hurting it. However, it must always have at least one column of two sand blocks. If one of the sand blocks is removed, the Antlion sinks down a layer. If a block is added on top of the column, the Antlion moves up a layer.

The Antlion shoots non-magical projectiles at the player. They remain stationary with their head sticking out of the sand, and will shoot sand at the player until they are out of range, or dead. They can also move up sand if they are near a wall made of sand. 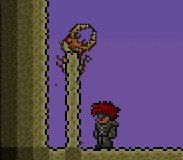 An antlion spawned on a pillar of sand.

An Antlion in dirt.

Antlion on a block of sand on the middle of dirt, notice that the desert is very close to it.

2 Antlions spawn near the other

An Antlion in Stone